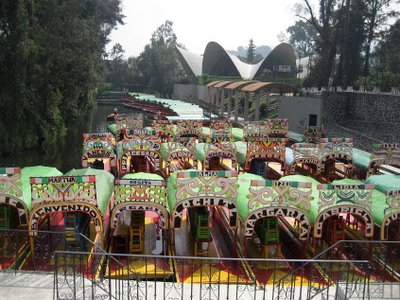 On Friday, the day before the wedding, Sergio drove us south to Xochimilco, a district of Mexico City which lays claim to the last few remaining canals of and its pre-Columbian floating gardens or chinampas built by the Aztecs.

Xochimilco is touted as the Mexican Venice. Its 180 km. tree-lined canals are plied by brightly colored and flower-decked trajineras, the local equivalent of the gondola and the amphibious cousin of the Philippine jeepney, complete with female names and the occasional religious praises distinguishing one from the other. We boarded one which had a long yellow picnic table and yellow chairs. There were 12 of us but it could have accommodated a few more. We were provided with a big tub of ice packed with beer and assorted sodas and juice for the journey. 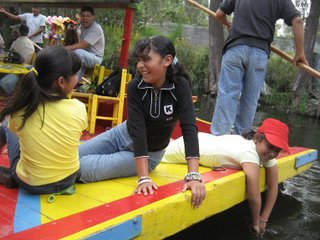 As the boatman expertly guided us out from the crowded dock and into the waterway, I sat back and let the experience delight my senses. We glided gracefully past private houses along the banks which reminded me of those homes along the canals near Camden Lock. We were approached by vendors on their own punts selling everything from jewelry to candied apples, corn, toys, ponchos, and of course flowers. Xochimilco does mean “place where flowers grow” in the Nahuatl language. We cruised past other trajineras carrying picnicking families, tour groups, couples on dates, and marimba musicians. 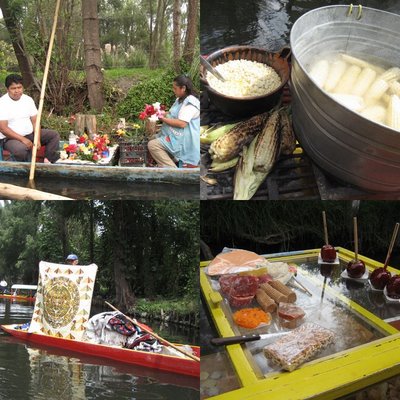 And then there were the mariachis! We were serenaded by 2 different groups. They attach their boat to yours and then entertain you for $6 per song. The first group did just that, and played for us from their boat. It was fun but not as fun as the second group! There were more of them, 7 to be exact, 6 men and one lady. They go by the name “Mariachi Mexico Juvenil de Luis Alberto Bustos”. (Yes, exactly that. I have their business card. J ). Talk about fun! They jumped onto our boat and their leader (Luis Alberto, I’m guessing) proceeded to introduce himself and his group with much pomp and pageantry. We couldn’t resist this young bunch of energetic musicians. They had us on our feet dancing, singing along and screeching as they shook their booties at us. By request, they played old favorites like Guantanamera, La Negra Tomasa, La Cucaracha and my personal all-time favorite Cielito Lindo, aaaaaayayayay! 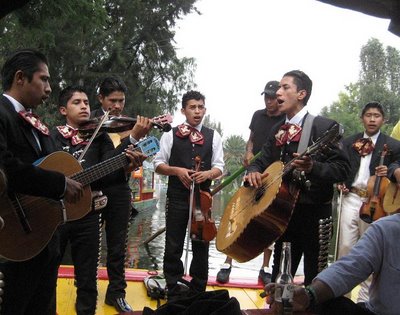 And then without warning the strangest sight appeared before us. There on the bank was a vision that would have spooked even Stephen King. Dolls were hanging on the trees, some with limbs torn off, mostly naked but many in ragged clothes, limply hanging by the neck, heads of dolls lodged onto ends of branches, all in various states of disarray. No one had an explanation for it, not Sergio, not the boatman, not any of us. We were stumped. I thought maybe it was a Halloween thing, it was Oct. 13 after all. 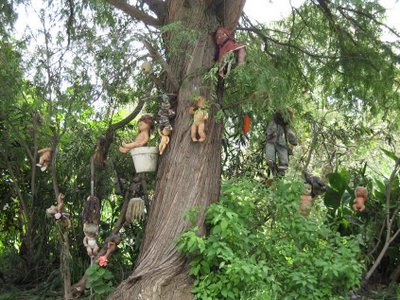 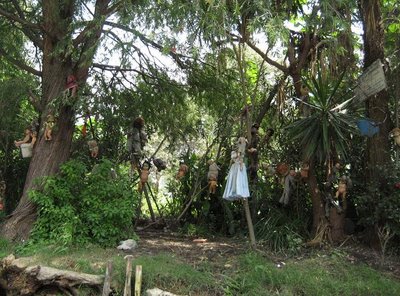 But as I was typing up this post, I decided to google it. Who knows right? Well, lo and behold I found an explanation! Apparently, it’s called La Isla de las Muñecas ( of the Dolls). The story goes that the island was haunted by a spirit soon after a little girl had drowned nearby so Don Julian, the previous caretaker, hung a doll on a tree to appease her ghost. News of the island spread and more dolls were sent by people from around the world. Don Julian's family is carrying on the tradition at present.

We had to cut the 2 hour boat trip short because we were anticipating heavy traffic back into downtown. That night was the rehearsal dinner to be held at Hacienda de los Morales and we couldn’t afford to be late. My first Mexican hacienda! I was giddy with excitement. 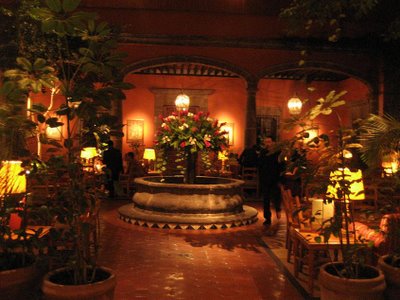 This Mexican insitution lived up to expectation, it was spectacular! It exudes old style glamour and elegance from every corner of those terra cotta walls. Torches in the courtyard and along the driveway lend a rustic and romantic atmosphere to the place. The original land title of this hacienda was a gift from Hernan Cortes to Isabel, the daughter of Moctezuma in the 16th century and was converted into a restaurant in 1967. It was bigger than I had pictured it to be. 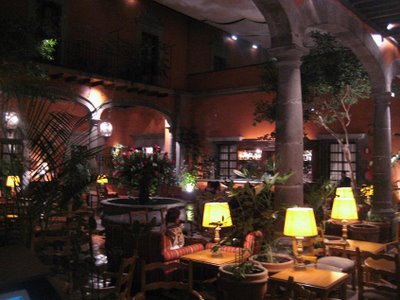 There was no way I could have taken pictures of the food, it would have seemed too crass in such a place. I had the duck in raspberry sauce which was superb! For dessert, I opted for strawberries and cream drizzled with chocolate which I chose from the dessert tray, a luxurious indulgence befitting the setting. The prices of course are steep and a strict dress code is imposed, keeping this establishment (it feels almost blasphemous calling it that) exclusive.

nena, can't believe you actually found the explanation for the hanging mutilated dolls, good job! Glad you enjoyed your first hacienda, which was really nice but there was actually so much more to see that I regret not having asked for a tour. again, for next time....

This is a copy of my response to your post on my blog: I was right! Thanks so much for inspiring me to get blogging! It's really fun. You can't imagine how many hits I get coming from your site. That is really cool! Thank you. I am one of yours too!

The dolls were really the creepiest thing. Isn't it amazing how people can think of these ways to ward off evil? The pictures were great. I remember the cumbancheros on the boat from your video. I particularly remember the one that seemed to enjoy gyrating his hips. You certainly got a lot accomplished during this trip!

OK, I finally got the nerve to look at the dolls...creepy! Reminds me of Blairwitch Project...remember they used to find sticks hanging from the trees? Anyhoo, I have to work on being less "duwag"...

That hacienda looks smashing! I would love to see Mexico someday, and I'm sure Carlo even more so! He will eat everything there!

Now that doll island would make a great B-rated ghost movie set and plot. We should send in a script! And make the evil doer a guy who doesn't smell! lol

Katia, I know! I really wasn't expecting to find anything. I thought it could have just been someone's idea of a sick joke. But it's so interesting to learn the real story behind it. Thank you so much for EVERYTHING Katia! There is nothing to regret, we did so much together. More than I could have hoped for. Now I just hope to see you again real soon. MWAH! :)

Knittymommy! Aww I didn't know I inspired you to continue blogging. You seemed to be doing quite well before we even discovered each others blogs. :) But thanks, I'm glad to know I helped.

KM, haha! Wasn't he such a ham? His gyrating seemed to intensify with every screech and whistle from us women.

Joey, that's what Rob said too. Reminds him of Blair Witch and I can't believe YOU of all people watched that?! Did someone tie you up?

Mila, I burst out laughing at that! But shouldn't we be able to smell fear? Though not from fear himself? Gosh, did that even make sense? Maybe he'll come after us brandishing a *EEK!* SUGAR-encrusted candied apple!

ay scary ang nakasabet na dolls ha. I remember my bro and i used to have a DIY horror train ride at home (he wheels me around with one of those ergonomic chairs, through the house where he had set up - yup - hanging dolls, fabrics, falling pots and pans, etc.) Parang ganyan yun.

Poch, haha! Ang cute naman ng brother mo. That's so funny. :) Wasn't it nice when there weren't any video games yet, we would have to be creative but we would have such a blast!

I was so happy to find this blog post. The Island of the Dolls was featured in a very creepy scene in the telenovela "Heridas de Amor" last night. I googled it and wound up here. Thanks!

Hi Julie! How interesting, it has celebrity status haha! It was a Mexican telenovela I presume? Well, glad you dropped by and said hello. :)

wonderful documentation of your trip - i enjoyed reading your adventure in xochimilco. i love your blog :)

Milkphish, I'm glad you directed me to your article, this is something that really interests me. I have bookmarked it for reading later tonight. And thanks for letting me link to your jeepney! :)