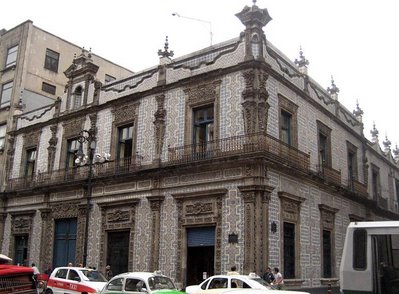 Casa de los Azulejos
This was by far my favorite restaurant in Mexico City and I felt it deserved it's own post. :)

Seeing the Casa de los Azulejos (or House of Tiles) in 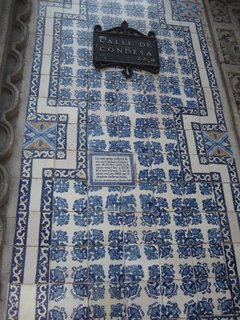 person did not disappoint. It was every bit as beautiful and as grand as the guidebooks and travel blogs promised it would be. What they did not warn me about was just how breathtaking it's interior is. This structure, which is entirely covered in blue and white tiles from Puebla called talavera , was originally built in 1596 and decorated by the Count and Countess of Orizaba 150 years later.

From 1881 it functioned as a men's club and then finally in 1917 it was converted into a soda fountain (the present layout seen in the photo below is reminiscent of this) which later evolved into Sanborn's, a large restaurant and department store chain in Mexico.

Casa de los Azulejos sits on an entire block and you can enter the building from either Avenida 5 de Mayo, Av. Madero or Calle de la Condesa. Passing through the doors from Av 5 de Mayo will take you into the diner-style eating area (below) which has a long winding counter and several booths. This is a popular meeting place for locals and tourists alike. 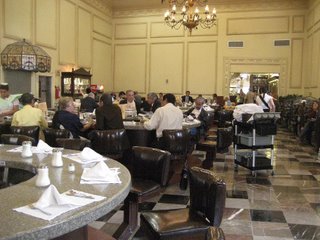 The diner/soda fountain at Casa de los Azulejos
If you opt for a more leisurely meal in an ambience fit for a condesa (countess), continue along through the door at the back which leads you into the mansion's charming courtyard where you can dine surrounded by its original Mudejar interior. Natural sunlight streams through the glass ceiling softened by the warm glow of antique lanterns. It is said that Emiliano Zapata and Pancho Villa dined here during the Mexican Revolution. 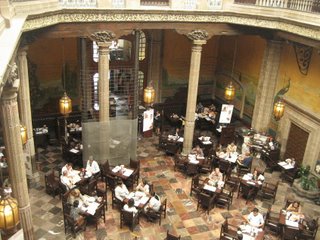 Diners in the Casa de los Azulejos courtyard
After we were seated and I placed my order, I excused myself to wander upstairs via the famous winding staircase which is decorated with wasit-high tiling and boasts of a mural by Jose Clemente Orozco called Omniscience on the landing.

I chose to have some sopa de tortilla and tamales for lunch that day. The sopa de tortilla now ranks up there with sopa de ajo (garlic soup) and french onion soup among some of my favorite soups. It has as many variations as there are cooks and this one from Sanborn's was spiced just right. The strips of tortilla lend an interesting texture to this spicy tomato-based soup garnished with avocado slices, cheese, creme fraiche, chicharron (pork cracklings). I'm definitely going to try to make this at home. Don't you just love how everything is served in blue and white plates and bowls to match the facade? 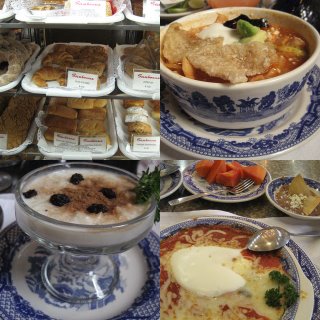 Clockwise from top left: Various bread and pastries from the restaurant's bakery,
Sopa de Tortilla, Huevos Sanborns and Arroz con Leche
The enticing smell of tamales from vendor's tamaleras permeating the air in the main plaza was too much for me to ignore. But because I was wary of Montezuma's Revenge, I begrudgingly tried to stay away from street food. Normally, I would throw caution to the wind with a muttering of "life is too short, live it to the fullest", but I was at the onset of my trip and didn't want to ruin it by getting stuck in the hotel bathroom nursing a bad tummy. 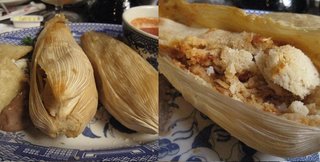 The tamale was on my 'list of food to try while in Mexico' so when I saw it on the menu I ordered it. Tamales are dumplings made of cornmeal or corndough called masa stuffed with your choice of meat ( in my case chicken) doused with chili sauce, wrapped in corn husks or banana leaves and then steamed. It was served with frijoles and tortilla chips on the side with extra sauce. It was good! The masa reminded me of the maize Mamaita (my paternal grandmother) would make instead of rice.

Sanborn's may be a restaurant chain, but it sure didn't feel like it with it's fine food, unpretentious menu and excellent service. After our meal, we strolled the aisles of Sanborn's drugstore and department store where one could purchase anything from bandaid to chocolate truffles, a CD player or expensive jewelry. We exited the building on Av. Madero and found ourselves in front of the Iglesia de San Francisco which was once part of the largest convent in New Spain.

On the day of the wedding, everyone was free to do what they wanted until the ceremony which started at 4pm. Some chose to have their hair and make-up done in the salon, others stayed at the hotel to rest for the big night, I opted to bravely venture out on the metro to do more sightseeing. It was my last day in Mexico and there were still a couple of places I wanted to visit. When I was satisfied with all that I had seen and done, I decided to reward myself with brunch in what had become my favorite restaurant in Mexico City - Sanborn's at the Casa de los Azulejos.

This time I chose to sit at the counter of the diner where I was later joined by an elderly gentleman in a suit and clutching an umbrella who came for his mid-day coffee. By the familiar greeting he received from the senorita behind the counter and how she took his umbrella from him without a word and kept it behind the counter, I got the impression that he was one of the regulars. He noticed I had a map of the city so he sweetly offered to answer any questions I had about his country. I thought this was very nice of him so I did ask him some questions and this led to a most interesting and educational conversation which I thorougly enjoyed as I feasted on Huevos Sanborns, the restaurant's version of huevos rancheros, and sipped on my capuccino.

The time had passed so quickly and I panicked when I checked my watch. I wish I could have chatted with him some more but I had to say goodbye to my new friend if I were to have enough time to get dressed for the wedding. I never got his name, but I will always remember this sweet and wise man who inspired me with his love for country and touched me with his kind eyes.

Casa de los Azulejos is located on Av Francisco Madero 4 and can be easily reached by foot from the Zocalo and is also just a few meters away from the Palacio de Bellas Artes.

Up next: Coyoacan and the Blue House
Posted by christine

Wow Nens! How very intersting and brave of you to strike up that conversation with that gentleman. A photo of the man would have made that post perfect. I can almost picture you speaking to him at the dining counter. I picture it in a very "old world" setting. That was great.

By the way, I really appreciated the phone call. Thanks.

Hello Ms. Gypsy Christine! I haven't yet read over your entries about what looks like a really cool (and probably delicious) trip to Mexico, but I just wanted to post & say .....

Welcome back! I will post something Mexico related in a little bit.

Hi Mieke, if you had seen him you would realize you didn't need to be brave. He is harmless and kind, and was so easy to talk to. He was also very patient with my less-than-great Spanish. :) It was so nice to talk to you on the phone! I just wish I could have seen you as well. Next time I should consider visiting the east coast too.

Hi Christina, very nice to see you! I haven't gone to BnA since I got back. Thanks for reminding me that I should go, I'm on my way to your post!