There's no denying it, summer is definitely here!

There is no more obvious indication of this than the sweltering heat we are faced with everyday, nd which only gets hotter and more unbearable as the days pass. The way I see it, there are only 2 ways to deal with it: airconditioning or escaping. And the beach is the fastest, easiest escape. Luckily, I live in a tropical country of 7,107 islands. There are beaches practically everywhere!

I love the beach. I love everything about it - the sand in my toes, the sea breeze in my hair, the taste of salt water on my lips, the sound of the waves crashing on the shore, the fiery orange sunset on the horizon, I can go on and on.

Most of my fondest childhood memories have a beach setting. My aunt had a rather large beach house in Tali, Batangas where we spent practically every holiday you could think of, every long weekend of half of my life. There would be , at any give time, about 70 people in that house. It was always blissful chaos. They would have all of us children sleep on matresses which were laid out on the balcony under mosquito nets. 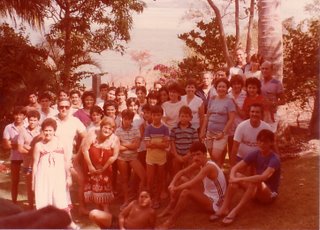 Look at those groovy 'dos! Can you spot me in the crowd? :) 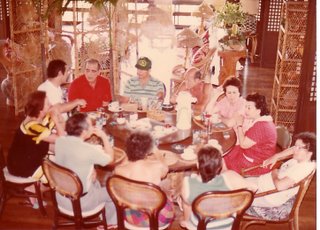 The dining area where only the adults were allowed to eat.

Our moms would lie in the sun all day while our dads would be out fishing and snorkling or sailing, then at night they would sit down for a noisy game of Domino. 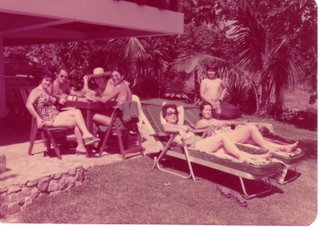 I can NOT believe they're actually playing domino out in the sun! That's my mom soaking up the sun with the big shades, taken around 25 years ago probably.

We, on the other hand, could be doing a hundred different things: playing ping-pong in the basement, wandering the fields in the back, drinking and singing to guitar at the pier, jumping off the cliff , swimming in underground caves, listening to ghost stories by bonfire, going island-hopping on the banca (canoe with outriggers), playing volleyball on the main beach, playing pennies or any of the many games we played during those times, pigging-out on the food laid out on massive buffet tables, swinging each other on the hammock, showering alfresco amidst bougainvilleas, terrorizing the goats and cows on the other side of the fence, gosh what didn't we do? 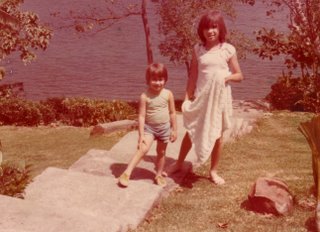 Me (the kid that looks like a boy) and my sister Ginny. I must have been about 5.

Sigh, I miss those days. Anyway, my point is, I was practically raised on the beach. From infancy through my formative years and into adulthood, it was there where I forged my most important friendships and bonds with cousins and family, and where much of my character was formed because of experiences and observations that happened there too. And of course, all those years instilled in me a deep love for the ocean and it's surroundings. It's like the best friend I know I can always run to to make me feel better and make me feel at home.

Even though we no longer go as often as we used to (there was a time we would go almost every weekend while I was in HS and college), I still make it a point to get myself to the ocean once in a while. Living in a tropical country makes that possible because every season is beach season. Anytime of the year is a good time to go for a weekend by the sea. Even during tropical storms. The storms just make it more romantic, lazier, a little chillier. But no less charming and soothing.