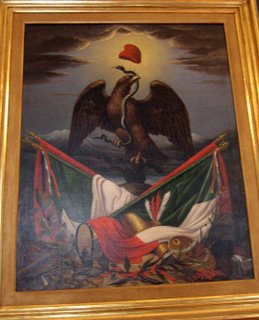 After our lunch at the Casa de los Azulejos, we walked down the cobbled streets lined with hotels and shops to the historic center of Mexico where the Aztec capital of Tenochtitlan once stood on an island in Lake Texcoco before Hernan Cortes and his men razed it to the ground. Legend has it that when the Aztecs first arrived here they were advised by their tribal god Huitzilopochtli (phew, had to look that up to make sure I spelled it right) to pitch their tents where they saw an eagle perched on a cactus holding a snake in its mouth. The omen was seen seen here on what was once an island in the middle of a lake. They named the island, Tenochtitlan, which means 'place of the prickly pear cactus'.

When we reached the Zocalo, the main square which is also known as the Plaza de la Constitucion, I stopped in my tracks to take it all in. The Zocalo, marked by a giant flag flying proudly from its center and framed by massive colonial structures in varying architectural styles in all sides, made me feel so small. In an online news magazine, I saw a picture of the Zocalo filled with protestors taken just weeks before. This is not unusual, as the Zocalo is the venue for many protests, traditional rituals and ceremonies, national festivities and concerts bringing together people from all walks of life but who march to the same drumbeat. 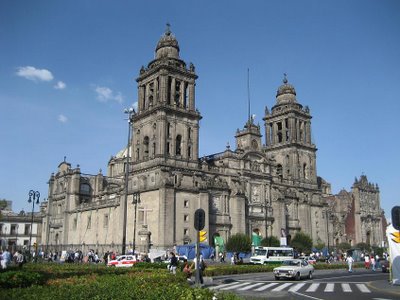 Catedral Metropolitana
On this day, however, it was the picture of peace. The sun-drenched square was covered in tents under which a grand booksale was being held. Tourists mingling with locals as they browsed through the selections, all penned in the local language. The baroque and neoclassical façade of the Catedral Metropolitana looms overhead, a stark reminder of its honor as the first and largest Catholic church in the Americas.

Another prominent building beside the Zocalo is the Palacio Nacional. This renaissance building stands on the site of Moctezuma’s palace which became the residence of Hernan Cortes after his conquest of Mexico. The building, which is reminiscent of the Palacio Real in Madrid, features the amazing murals of Diego Rivera, including his grand mural by the staircase which depict his views of the country’s turbulent political history. 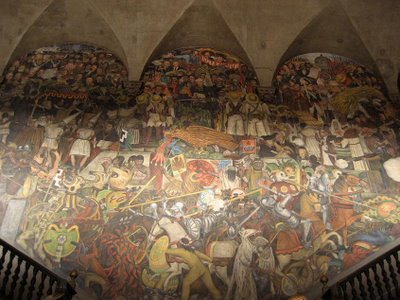 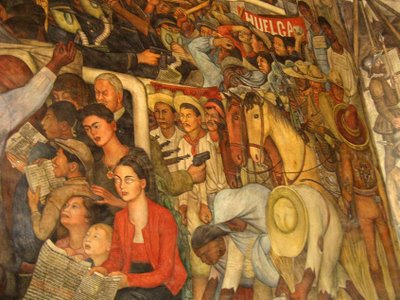 Epic of the Mexican People - Mexico Today and Tomorrow, 1934-35
Can you spot Frida Kahlo? 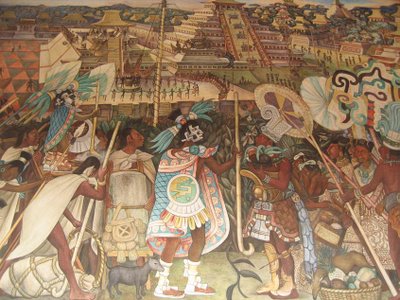 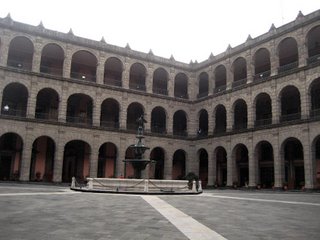 The courtyard of the Palacio Nacional
The Templo Mayor built by the Aztecs in the 14th and 15th centuries is now a massive archaeological site beside the cathedral. Unfortunately it was already closed when I got there so I missed seeing the many levels of excavation as well as the museum inside.

Not too far from the Zocalo, is the Palacio de Bellas Artes, arguably the most beautiful building in the Historic Center. The exterior of the building is clad in Italian marble and its cupolas are covered in tiles. The walls of the second and third floors are covered in murals by Rufino Tamayo, David Alfaro Siqueiros and Jose Clemente Orozco. 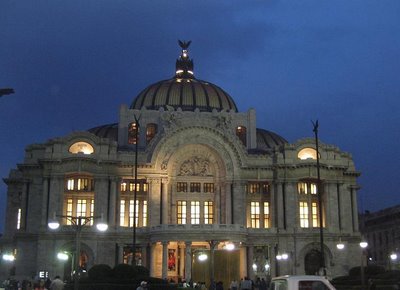 Palacio de Bellas Artes
The Centro Historico is the heart of Mexico which pulsates with life every minute of the day, almost threatening its visitor with sensory overload. The smell of steaming tamales permeates the air mingling with the smell of exhaust from the traffic. The sweet smell of coffee brewing form a nearby café. The sound of senoritas chattering as they peddle their wares on the sidewalk, pierced by the occasional burst of laughter or squeal from children playing nearby. A cumbia or marimba beat emanating from someone’s portable radio. The taste of grilled corn on the cob slathered with mayonnaise, chili, salt and cheese or a torta stuffed with meat, avocado, cheese, sour cream, tomato and jalapeno. Little boys playing their accordion for some change, taxis whizzing past in a green and white blur, Aztec ruins blending with churrigueresque architecture. We have barely scratched the surface of this wondrous city that has seen so much. 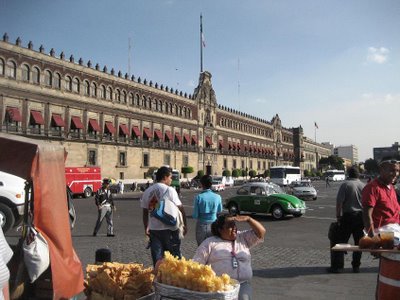 Street food vendors with the Palacio Nacional in the background

Up Next: Basilica de Guadalupe & Teotihuacan
Posted by christine

What an adventure you must have had! Everything looks wonderful...How great to see Diego Rivera's murals in person! :)

Sigh...Carlo and I ate in a Maxican restaurant today and it wasn't too good :( (I mean not even good for tex-mex or fake-mex or whatever) And all I could think about was your post...we were both full after but not really satiated :(

Manila could have been just as photogenic had it not been carpet-bombed during the battle of Manila.

BTW, in today's PDI article of Ambeth Ocampo, he wrote about how closely linked Mexico was to the Philippines for hundred of years, yet today not too many Filipinos know much/appreciate such connection.

Come to think of it, the Black Nazarene of Quiapo was a Mexican import.

Wonderful entry. Thanks for sharing!

Hi Jo, an adventure indeed it was and I barely scratched the surface! :) There is so much more to see and I would love to go back someday. I think I know which restaurant that is, the one in the Fort? I have yet to hear anything stellar about it.

Thank you, Eric! :) I totally missed that article yesterday. I'd really like to read that so thanks for the heads up. I'll go get yesterdays papers now...

Yes it is the one at the Fort! Haha! Hay nens...I have to learn how to make some kind of Mexican dish for that poor boy!

The pictures looks so nice!! Ang galing! Mexico looks really lovely, it seems like their culture is super rich!

There's definitely something with Mexican and Spanish architecture that I sooooo love! I can't explain it but I'm so fascinated with them!! :)

Jo, if there's one thing about Mexican food, it is so simple to make. Most of the dishes are no-fuss, and you can tell by the lack of presentation. All you need is a good supply of chilis, different kinds. :) And btw, I had my eye on that resto for a few months now and even dropped by one afternoon to get their phone number. Now I don't regret never having used it.

CanDIshh, I'm with you there! Whenever I travel, it's the unique architecture and local food that I most enjoy. Next would be the music. In Mexico, you would fall in love with the San Angel and Coyoacan neighborhoods for sure! :)