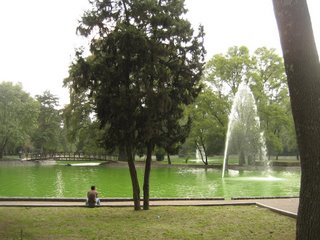 City folk need a pleasant place to escape the hustle and bustle of city life, somewhere where they can reconnect with nature and hear they’re own thoughts. Fortunately, in most major cities urban planners and officials recognize this need and maintain public parks for residents and visitors alike. Many of these parks are world famous such as NY's Central Park, SF's and Barcelona's Parc Guell and London's Hyde Park or Richmond Park, to name a few.

Honestly, I don’t know what I would have done without Hyde Park in to keep me sane. I loved bringing a book, my portable CD player and some fruit and finding my quiet spot by the lake, spending hours reading, people-watching, and even dozing off as the breeze and the sound of birds lull me to sleep. When I travel, I like looking for these spots because it is usually here where you see locals in their most natural state doing what it is they like to do when they’re out on a pleasant day.

In , this sanctuary in the city is called Bosque de Chapultepec or , a 1,600 acre haven of lakes, centuries old forest and outdoor cafes. It is also home to a zoo, a castle and at least 3 museums including the . It has been a public park since the 16th century when Spanish King Carlos V declared it a national reserve. 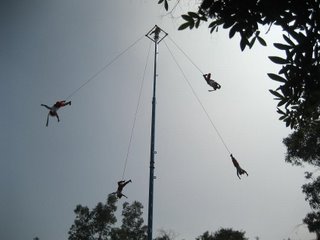 Across the entrance to the Museum of Anthropology, you can watch the Voladores (flyers) perform an ancient ritual where five men in colorful traditional costumes and headdresses climb a 150 ft. pole, tie their ankles to ropes wound around the top of the pole and then throw themselves backwards into the air.

While the rope unwinds and they slowly “fly” upside down and in a circular motion towards the ground, the 5th man who is left at the top plays the 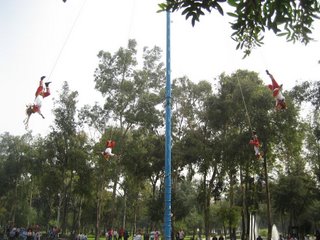 ceremonial flute until the voladores reach the ground. The rope unwraps itself 13 times for each of the four flyers, symbolizing the 52 years of their century.

It is almost hypnotizing to watch them circle the pole in a kaleidoscope of color accompanied by the haunting tune from above. I watched the whole "dance" twice, once before entering the museum, and again before continuing on to explore the rest of the park. 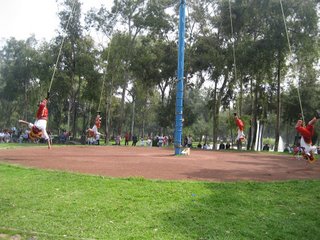 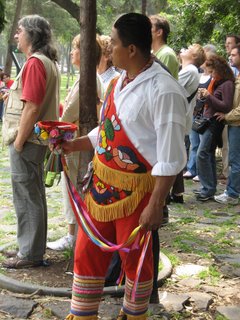 After we watched the voladores, we strolled around the park in search of the Castillo de Chapultepec, an 18th century castle which sits on the summit of a hill which was once the home of Emperor Maximillian of Hapsburg and now houses the Museo Nacional de Historia. Along the way we passed vendors selling all sorts of stuff: food and refreshments, balloons, toys, cotton candy, souvenirs, tiny potted cacti and even flip-flops.

We watched boaters on the lake and munched on cheese puffs with chili sauce. The locals love to squirt chili sauce on everything, even popcorn. There were stands that offered munchies that came in all shapes and colors (see bottom right pic on the collage below), which were popular among the young folk. The climate couldn't have been more perfect, it was sunny with a crisp cool breeze. The park was abuzz with people but there were also many quiet pockets here and there. We enjoyed ourselves so much that we didn’t notice the time and when we finally reached the Castle, it was too late go in. Again, something left for the next time. :) 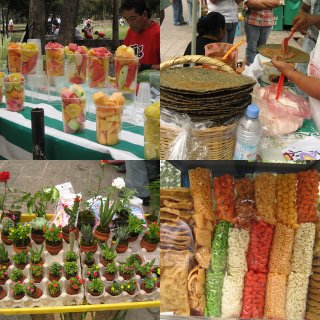 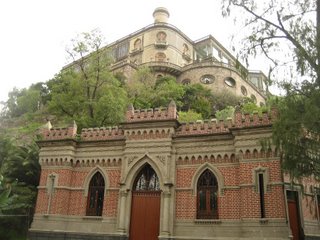 Up next: No quiero taco bell! (the food post)

If only we had something similar here. It's such a necessity, given the horrible pollution everywhere. Luneta is a poor equivalent. Ugarte Triangle, formerly the only decent (though miniscule in comparison) park in Makati, has been taken over by buildings already. And Greenbelt Park, which was even tinier, has so little green left these days. THIS is what they call progress?! :-(

Here I was suggesting you reminisce gently and I forget to check your blog! Oh well, I get to catch up in my reading then! Lovely photos and at least I haven't missed too many food photos yet.

Katrina, I agree. I was going to give Rizal Park and Ugarte Fields as examples and then I realized there was no way they could be mentioned side by side with Hyde Park and the like. It's sad.

Hey Mila! Because you're like the 5th person who has mentioned "food", I'm going to post about that next. :)

Nens! Lovely! I can so totally sleep in a park...let's go back to La Mesa dam when the weather is better so I can do that! :) I'm going to invest in a beach chair already that I can take with me anywhere.

This is getting me in the mood to picnic!

Hey sis and Joey, please plan another picnic at La Mesa dam. Can't wait to sit and commune with nature. Sitting in nice parks is such a feast to the senses.

Nens, love your photos! And the vibrant colors. I still can't get over the fact tho that living/breathing there is like smoking 3 packs of cigarettes a day!!! omigosh, the poor lungs of those people. plus the thin air. I guess they are used to the climate. But your story of being baffled that you were gasping for air alot and had no clue till you saw Nat2 breathing heavily and struggling also still makes me laugh. Ayayay, you must have a blog about all the silly and funny incidents.

Beautiful photographs! It's so nice to learn about other cities!

Ginny and Jo, let's! I couldn't appreciate the place fully because it was muddy and rainy but I would love to go back on a clear day. Let's try to go before March, before it gets too hot.

Gins, that really freaked me out! I was already planning to get myself checked when I get home. Of course in retrospect it's funny! hehe

Hi Ivonne, thanks! And yes, I agree. That's why I enjoy reading travel blogs. It also allows me to live vicariously through others who travel to places I haven't been to. :)