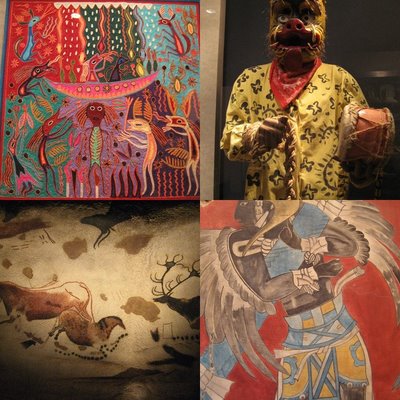 By the second day, some of Katia’s family and friends had arrived and together we discovered a friendly café across the street from the side entrance of our hotel which became our daily meeting place for breakfast and coffee. What I loved best about this café was the free bread basket which is unlike your typical bread basket. This one was actually filled with cake slices rather than bread, and if I were to make a guess as to what they were, there was a slice of pound cake, fruit cake and some kind of butter cake with nuts. I'm not a fan of fruit cake at all, but this one I adored!

By 10 am, Sergio (Katia’s fiancé) picked us up and we set off to explore Mexico City, or D.F. (Distrito Federal), as it is more commonly referred to. What surprised me most about this city was how green it is. Being a megalopolis that is the financial center of Latin America, Mexico is no stranger to highly-urbanized area problems like traffic (Manila traffic suddenly feels like Autobahn traffic!), pollution and poverty. So it was refreshing to see lush greenery that seemed to counter the feeling of “smoking 3 packs of cigarettes everyday” which is how breathing in the air of Mexico makes some feel. But all these problems are quickly forgotten as the intense experience that is Mexico City engulfs you. 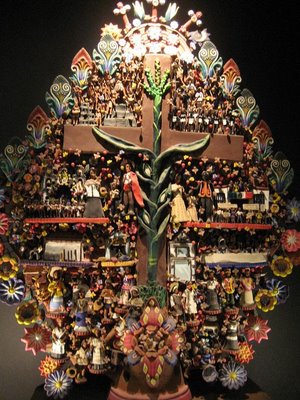 Arbol de la Vida ( Tree of Life)
- a clay sculpture covered in flowers, leaves and biblical figures.
So first on the agenda is the National Museum of Anthropology which is located in the Bosque de Chapultepec. I was really looking forward to this, as I had read a lot about the priceless collections in its galleries. This world-renowned museum is an excellent introduction and orientation to Mexico and to some of the places we planned to visit like Teotihuacan. The entire ground floor of the museum is dedicated to archaeological finds from ancient Mexico, with each room dealing with a particular civilization or region of the country such as Teotihuacan, Toltecs, Aztecs, Oaxaca, The Maya and the Gulf Coast. No visit to Mexico is complete without a trip to this museum! 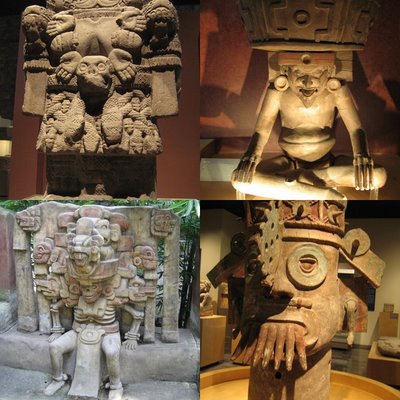 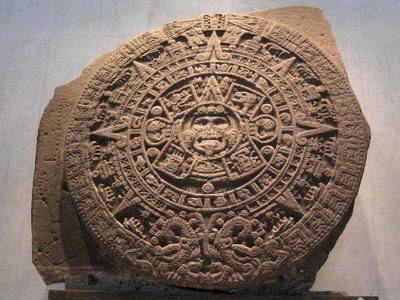 The Sun Stone (sometimes wrongly called the Calendar Stone),
this 24 ton basalt stone was unearthed in the Zocalo in 1790.
I highly recommend allotting at least 4 hours to see the entire museum, and making this your first stop. There is so much to learn within its halls and you will want to take your time. You may prefer to rent an audio guide which are available at the entrance, I decided to just wing it with my guide book. I regret not having enough time to explore the second floor which is devoted to Mexican ethnology like costumes and the festivals of the 56 surviving indigenous cultures of Mexico. But as they say, you should always leave something for next time, right? 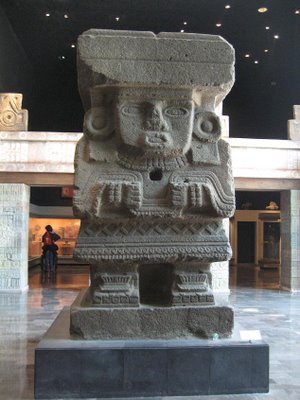 Sculpture of the water goddess Chalchiuhtlicue
(don't you just love her name?)
which dominates the Teotihuacan gallery 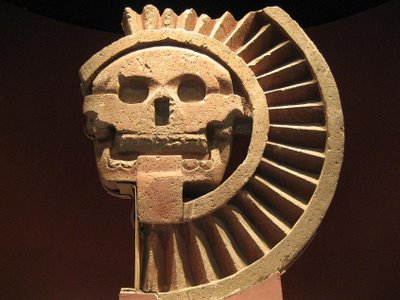 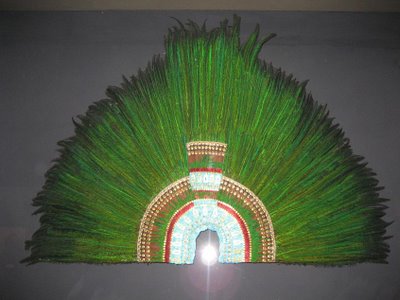 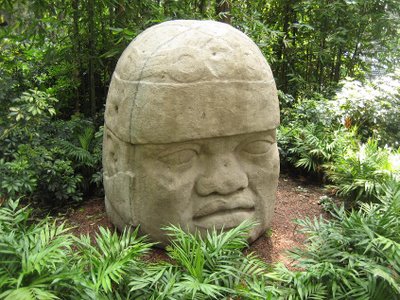 a colossal Olmec head,
he kinda looks like someone I know :) 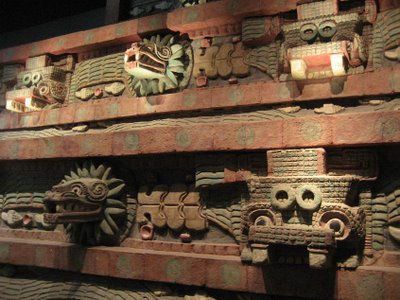 Detail from the reconstruction of the Temple of Quetzalcoatl
The largest gallery in the Museum is the Aztec Hall with the Sun Stone as it's backdrop. The Aztecs were the last great Mesoamerican tribe who were responsible for building great cities, temples, pyramids and established one of the most advanced civilizations in the Americas. The Aztec empire was conquered in 1521 by the Spanish conquistadores led by Hernan Cortes but they left behind a rich vibrant culture as evidenced by the collection in this hall.

Up next: Bosque de Chapultepec
Posted by christine

I loved the photos you took for this post, may I ask - they didn't mind? In NY, the museums never let us take photos, I suppose to make us buy cards of what we wanted to remember from the exhibit from the gift shop.

That Olmec head looks so Asian, no? I know some guys who'd be the twin of that statue!

Nope, they didn't mind at all as long as you didn't use any flash. I have to guiltily admit that my flash went off by mistake (I swear it wasn't intentional, please don't arrest me!) when I took that shot of the replica of Montezuma's headdress. In fact, I was quite surprised the picture turned out because since it was encased in glass, I thought the flash would just reflect and leave you with a washed out photo.

In many museums (even the Louvre), they allow you to take pictures as long as you don't use any flash. But when I went to Frida Kahlo's house which has been turned into a museum they didn't allow any pictures to be taken anywhere inside. Only in the garden.

I love these photo set too!! Ang galing :)

christine-- thanks for sharing with us your adventures :)!!

Anton, thanks and you're welcome! You've shared so much more. :)