The adventures of a stormy island wedding

Got back from Boracay yesterday, a day later than planned. What an adventure!

Because of typhoon Caloy (international name: Chanchu), Joey and Carlo were forced to move the wedding to Sunday afternoon in the hopes that the storm would let up by then and that those stranded in Caticlan could finally cross to the island. 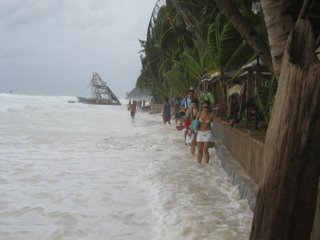 Where's the beach? This was taken Saturday, what was supposed to be the wedding day.

Despite the foul weather, we still managed to have a great time. I really don't think it's possible to have a bad time in Boracay. And we never forgot the reason we were all there: to celebrate the union of two of the sweetest, most beautiful people in the world!

The day we arrived was still sunny, the guys got to play volleyball and football and we had cocktails by sunset outside White House, and dinner in the Mongolian place in Station 2. 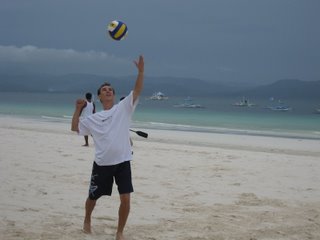 We also braved the winds to eat in some new restaurants in the next couple of days like Lemon Cafe, Bamboo Lounge and Zuzuni and to check out the new stores in D'Mall.

Just a quick sidenote on the above-mentioned places:

Being a lemon lover, I was psyched when I found out Boracay had a new place called Lemon Cafe. I could almost taste the lemon tortes, the lemon cheesecakes, the lemon squares...ok I'm drooling now. So on our first day, I wasted no time in dropping by for some sampling. I was not disappointed. I had the lemon torte which had the perfect sweet-sour combination I love about lemon desserts. We were so happy in fact that we went back that night for dessert again after dinner. This time I had the lemon cheesecake, yum! 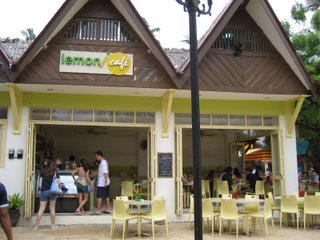 Zuzuni was just great. Super friendly staff, cozy ambience, and most importantly delicious Greek food! They even gave us complimentary dessert which was just blissful - natural Greek yogurt covered in honey and crushed almonds ( at least I think it was almonds). WOW! Sometimes I make myself something similar for breakfast but without the nuts, I'll have to try it their way next time.

But Bamboo Lounge. Bamboo Lounge was simply excellent! My words will not do it justice, you just have to try it yourself. That was the best meal I had in Bora, hands down.

I think we managed to help the bride and groom keep their spirits high despite all the worry and stress the weather was dealing them. Then again, being the cheerful, happy people they naturally are, I don't think they needed our help. They were such troupers, not letting it dampen their moods. They put on a strong face and partied every night with friends and family.

The Despedida de Soltera on Friday night was held at Boracay Terraces Resort. What was supposed to be an outdoor guateque (loosely translated as a Spanish pot-luck party) and paella cooking contest became an indoor paella pleasure fest while the winds howled outside and the glass windows shook menacingly. 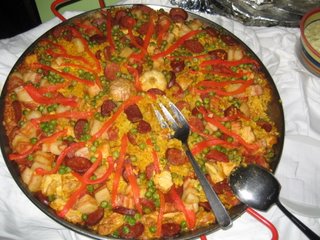 Santi's paella which won in the aesthetic category.

There were four paellas made, and each one received a deserving award before getting wiped out by the guests soon after. They were al so yummy!

We were near the northern tip of the island, experiencing the eye of the storm and the night was cut short when one of the windows gave way and shattered into tiny pieces. Thankfully, no one was hurt. I don't think I ever experienced a storm in full force outside the city where there is nothing to lessen its impact. I have to admit I found it quite fascinating.

On Saturday many of those stranded in the mainland (including the father of the bride and the maid of honor) were finally allowed by the coast guards to cross the waters to the island. On what was supposed to be the wedding night, everyone celebrated with roasted calf, drinks and dancing. It seemed almost as if the wedding was meant to be moved, just so we had an extra night of partying. :)

On the actual wedding day, despite a brief downpour during the wedding ceremony (which is believed to be a downpour of blessings from Above) , the sun came out as if bringing with it a fresh new life filled with hope and promise for the newlyweds. It was a beautiful day for a wedding, breezy and balmy. Joey was positively glowing! 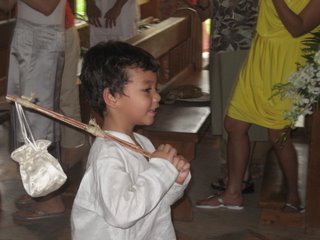 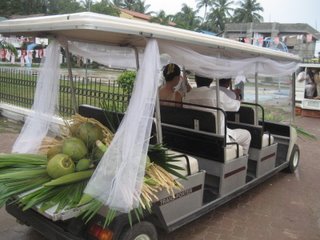 The ceremony was short and sweet, and the reception in Sea Wind was a blast. The speeches were so touching, I don't think there was a dry eye in the place and the couple couldn't look any happier. This has to be one of the most romantic and charming weddings I had ever been to. :) Joey and Carlo, you deserve nothing less, I love you both so much! 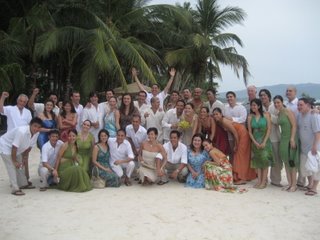 Us with the newlyweds.

the pictures are beautiful (well, except for that saturday shot).

i couldn't get it out of my mind - a boracay wedding, that is. that was mine and my fiance's first plan. however, i know this wouldn't be possible anymore, since i know this would be more financially straining on our part. but who knows...

This is the second boracay wedding I've been to in the past 2 years. It really is a dream destination for weddings, but you are right about it being a strain on your pocket. Not only on yours but on all your entourage and guests too.

Congratulations on your engagement! :)

nice blog you've got here...just a
q., where exactly is Lemon Cafe
in Bora? i mean, which station is it
nearest along the beach? looks totally
yummy, i must say!

Hi grumpy, thanks. Lemon Cafe is in d'Mall, just right inside. If you're coming in from where Aria is, it's to your right in the first corner. Facing the ferris wheel. It's really good,you gotta try it if you go!

Hey Nens! I actually heard about Carlo's wedding all the way here! Can you imagine? I was with the two Michelles (Sandejas and Barretto) in NYC during the wedding. I wish them all the best. Would you mind e-mailing me the group picture? I would love to see how everybody looks now! Take care! Miss you!