A Bootie meet-up and my 1st Chinese New Year

If you haven't already noticed from my blog roll on the right, I frequent a lot of travel-related sites. Each site has it's purpose in my world plagued with wanderlust - to inspire, to inform, to entertain, to connect - you get the picture. One site that does all that and more is BootsnAll, a virtual mecca for backpackers and travel enthusiasts. Like I've mentioned before, I prefer to hear from fellow travellers when doing research on future trips so I come here to find insightful and amusing articles, useful tips, personal experiences, and an active forum that touches on practically every topic imaginable, including Food & Travel which (surprise! surprise!) is my favorite.
It was at these forums where I met the lovely ladies I had dinner with on the eve of the Chinese new year. Christina is a Fil-Am from Brooklyn, NY who was born here but moved to the US when she was little. She is currently on a 2-month solo backpacking journey around the Philippines and was responsible for initiating the meet-up. Also there were Leslie, a former Lakbay TV staff who turned out to be my neighbor (!), and Jenna, an American teaching English in Taiwan.

So it was that we met-up at The Oarhouse on Mabini St., which came highly recommended by Carlos, my personal Malate insider ;). It was originally opened in the mid 70's by an American Peace Corps volunteer and later resurrected in the 80's much to the delight of artists and journalists in this bohemian neighborhood. So over a huge plate of shnitzel, delicious onion soup (both recos of Carlos), kinilaw, cheese sticks, and beer (interestingly we each ordered a different kind of local beer: San Mig light (mine), Cerveza Negra, Red Horse and Pale Pilsen), we happily chatted and swapped stories. 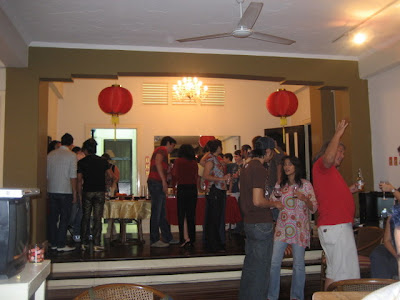 By 10:00, we walked on over to The Living Room for the Chinese New Year party hosted by Carlos and Tessa. They had a nice spread going on that included Charlie's pritchon (roast pig served peking duck style), sisig pizza and pork siomai. We were rolling into the year of the pig after all! :) The apartment had a festive feel, red Chinese lanters hung above us, ang paos (lucky money envelopes) were taped to the walls, and a Chinese movie played silently on the tv. Other symbols of good fortune strewn about such as oranges, longgan and gold chocolate coins (they say round shapes symbolize togetherness). A fortune teller read her cards for a small fee inside one of the rooms. 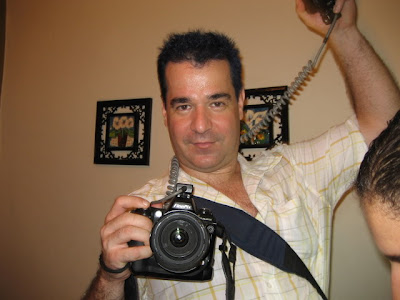 The "aggressively shy" Andy was also present doing what he does best, capturing the moment with his camera. I caught up with many old friends and made new ones. And I was happy to see my Bootie friends were having a good time as well. By 11:30, we trooped on foot to the Taoist temple in Malate to join the Filipino-Chinese community as they ring in the new year. 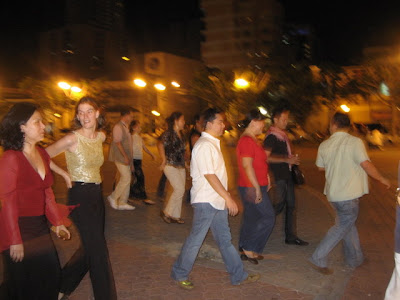 As expected, it was packed with people dressed in the lucky color red and waving their ang paos in a circular motion over smoky incense pots to invite good fortune. Over at one corner, a group chowed on noodle soup in cups, the noodles signifying longevity. Everywhere you looked, it was a cacophony of red and gold shrouded in a thick blanket of fog from a hundred burning incense sticks. It was noisy and chaotic. Chinese music blared from the speakers, and everyone seemed to be talking or shouting all at once. Then at precisely 12:15, just when I thought the smoke from the incense was too much to bear, everyone spilled out onto the sidewalk to watch the pretty fireworks display. Now why is it I've never celebrated Chinese new year before (aside from the fact that I'm not Chinese)? Now that I know what I'm missing, that'll have to change. 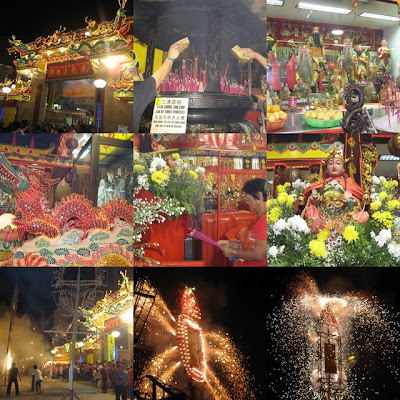 After the last rocket went off, we made our way back to the Living Room for more drinking and partying. But not before we were accompanied by a group of lively children (below) who serenaded us with Whitney Houston's Greatest Love of All. And quite beautifully, I might add! Much to their amusement we joined in, which only prompted them to sing louder as we marched on. They were adorable and their joy and enthusiasm was so contagious that every person or group we passed burst into song as well, until practically half of Remedios St. was belting out this tune. Oh Whitney would have been proud! And that, my friends, is true Filipino spirit for you. :)

Christina captured the essence of the night perfectly here. :)

I've been to the Oarhouse and their balbacua is also good. It's a hangout of news photographers. But I have yet to go to the Living Room. Looks like everyone had a blast during the CNY:)- ajay

I've never tried balbacua! At least not that I know of. But it's something that would have to be tried at a reliable place no? Good to know the Oarhouse makes a good one. :)

I have travel envy.

I so enjoyed reading this post Nens! It sounded like a blast! Take me to that Oarhouse! :) I also love the singing kids...so cute and adorable. Filipinos are born performers, like moi :) Anyhoo, this was such a feel good post and such a nice read to end my day :)

Hi Lizza, belated happy birthday! :) Yes, we had loads of fun, need to do that more often really.

Hi Jo, let's go! We can make a trip to The Oarhouse anytime. I love the staff, it's so small and intimate that you're treated like house guests. And the kids were the best! Loved their spirit. :)

Wow! You celebrated Chinese New Year in style! Looks like a fantastic night!

Hi Sindey, it was a pretty fantastic night! But you guys celebrated in style as well, with dragon dances and all. :) We saw the tail end of a dragon dance as it entered one of the bars on Remedios.