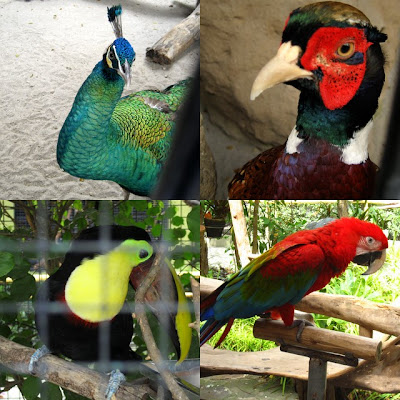 'Avilon' comes from the words aves meaning birds and lon meaning land.
And there were lots of birds!
I can't remember the last time I went to Manila Zoo, but I remember clearly being horrified at the sad state of affairs over there. Many of the once-proud animals looked half-dead, and those that still had enough energy in them paced in their grim enclosures with an almost crazed look in their eyes, fearful I'm sure of suffering the same fate as their fellow zoo mates. It broke my heart. (The zoo has since gone through a major overhaul thanks to the Friends of Manila Zoo.) 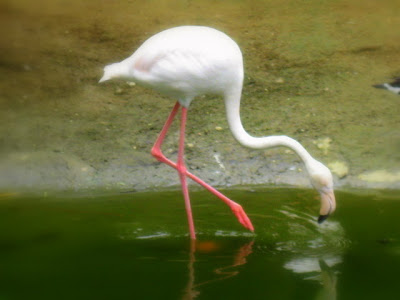 I could no longer bring myself to own anything that was to be confined like birds, hamsters and rabbits. I even drained and sold the 20 gallon fish tank I owned. As much as I loved having all these pets in my home, I couldn't bring myself to sleep well at night knowing I was keeping them from roaming freely in their natural habitat.

Joey, no relation to our friend over at 80 breakfasts ;)

But don't get me wrong, I have nothing against zoos as most are established and maintained to promote educat 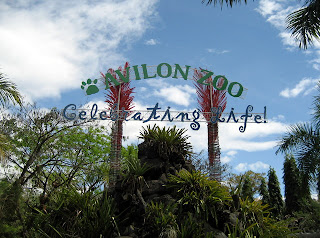 ion and research and play an important role in the conservation of endangered wildlife and where I like to believe they treat their inhabitants humanely. Today, we have a number of such zoos around the city like Malabon Zoo, where I stroked the fur of my first tiger, had a snake draped around my neck, and carried and cuddled the cutest baby powder-smelling and diaper-wearing baby orangutan.

In 2003, another such place opened it's doors to the public in Montalban (now Rodriguez), Rizal, the Avilon Zoo. The zoo is the brainchild of Jake Gaw who was forced to find a new home for his growing pet collection after neighbors started to complain. I heard only good things about it so I was excited to check it out for myself with my friends and their kids last Saturday. 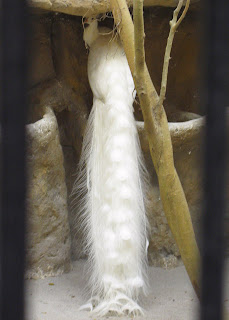 After making a couple of wrong turns (and laughing insanely at the comical directions we printed off the net), we arrived at the zoo at 12:30, two hours after we left Parañaque. We had a quick lunch of homemade tuna sandwiches, hotdogs and corn (you can bring your own food) in the pavillion, surrounded by a lily-covered moat, we began our exploration. We were a little lost at first as there are no directional signs or marked trails within this 8 hectare nature reserve.

Barely halfway through the grounds, I regretted not hiring a tour guide. Most of the animals cages/dens were not labeled. It was only because I asked a lady from the group with a tour guide that I knew the rhinoceros-like mammal with the funny snout was a Malayan tapir. I was very impressed with the wide range of exotic animals and those endemic to the Philippines. I didn't expect to see kangaroos, hyenas and flamingoes. Until now I didn't know about the Brazilian arapaima, the world's largest freshwater fish, which you can feed chicken heads for a small fee. 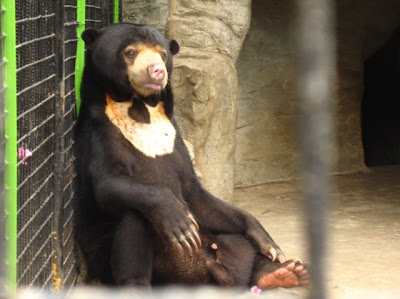 One of my favorite residents - the sun bear. Isn't he just so cute?

The zoo's commitment to maintenance and sanitation is apparent in it's surroundings and inside the animal's homes which are simulations of their natural habitat. There are sections dedicated to nocturnal animals such as armadillos and primates where you are prohibited from taking pictures even without the flash. Though the zoo was busy with groups of school children and families, it was big enough that it hardly seemed crowded at all. P50 / $1 would buy you an opportunity to have your picture taken with an owl on your shoulder, a snake on your lap or draped around your neck, or astride a miniature horse. 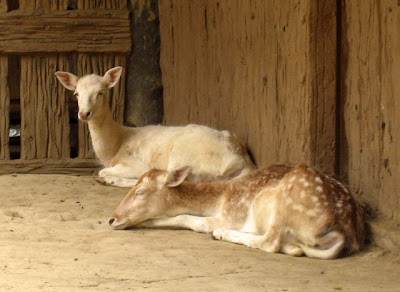 I would strongly recommend hiring a tour guide, not only to help you understand the origins and habits of each animal, but to make sure you don't miss anything. I found out later from a friend that we had missed seeing the capybara, the world's largest rodent and the different species of crocodiles. The zoo is home to over 3,000 animals, 500 species which make it well worth the long drive. 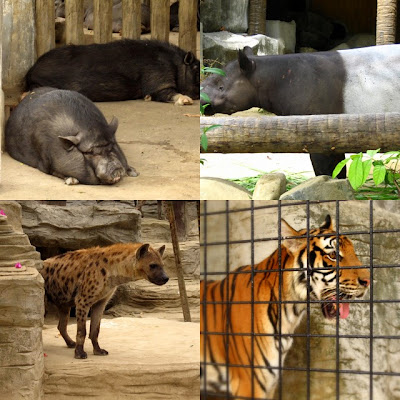 It looked like so much fun! Wish we could have gone! :) That last picture of the hog lying with his snout between his hooves is just too adorable!

Thanks ajeya! They were such interesting and colorful subjects. :)

Jo, we can always plan a trip there another time.There's lots of construction going on inside the zoo, evidence of their continuous expansion. I hear they add new animals often, so I wouldn't mind going back. Besides, I missed the one thing that Maite told me not to - the capybara!

anyway, i've got 2 complimentary tix to Avilon Zoo and i've had them for a year [how i won the tix? its posted under the Feb. 2006 archives of my blog], but haven't used them yet after all this time!

So, i'm just giving them away, so if you know other bloggers (or anyone reading this post) who are interested to score 2 free tix to Avilon Zoo, just email me at grumpyurbanslacker@gmail.com

Ive been to avilon zoo and it is the best zoo in manila. very clean, the staff very accomodating, the animals look well. they have quite a big selection of birds but i know theyre gonna get more animals, dont know if they have an elephant yet. apparently you can even have kiddie parties there although it is quite a drive, its worth bringing a bunch of kids to.

I love Avilon Zoo! Haven't been there in over a year, but it's nice to know that they're still around and people are still visiting. =)

I know what you mean about feeling bad for animals in zoos. I've from San Diego and there is a huge zoo there - in the 80's and 90's the tigers, for example, were pretty much kept in a large sandbox. Poor tigers! But then several years ago they revamped the entire thing and created a huge enclosure that literally looks like their natural habitat. Same for the gorillas. I know it's not as good as the animals being free, but it is better than before. And at least they don't have to worry about hunters/poachers right? Oy, what a world we live in.

Hi GUS, thanks! :) And thank you for offering your tickets. hope someone who reads this avails of them. Is there an expiration date for the tickets?

Hi mirs, no elephants yet, or giraffes. Which I thought a little strange because I've always known them to be 'staples' in any zoo. But they're continuously expanding so I'm sure it won't be long.

Wysgal, it was my first time and I was really impressed. There were many people that day, mostly groups of school kids on a field trip and lots of families. It was so nice seeing the kids go gaga over the animals! :)

Hi Ari! I'm so happy to hear that. I would have thought that San Diego Zoo, being one of the world's premer zoos would pride themselves in treating their residents in the most humane way possible and would have the best natural habitats for them. Thank you for confirming that for us. :)

nope, the two tix don't have specific expiry date. i dropped by the avilon zoo booth at THIS year's Travel expo and they said its still valid....pero after seeing your pics, i don't feel the urge to drag myself all the way there since parang nakapunta na rin ako. :-D

No, GUS, you still gotta go! Nothing like seeing the animals up close. The pictures don't cut it. Use your tickets, bring a date! :)

I love zoos that actually look after their animals.. and the Sun Bear looked like he was a little man in a tux. Love!

Isn't he adorable?! You're right, it does look like he's wearing a tux. :) My first impression was that it looked like a baby's bib.