For our third and last night in KK, we booked ourselves at the Shangri La Rasa Ria resort about 45 minutes away from the city. Back when I was deciding on a resort, the Rasa Ria won me over with it's great location (wedged between sea and jungle and quite secluded) and plethora of activities. Of course the photos on the website helped a lot too.

As soon as we stepped out of the hotel shuttle, we were welcomed by the warm and friendly staff with a bang on the gong and a very interesting glass of iced-tea that had a kiamuy (dried plum) floating in it. Beyond the big and sunny lobby was the sprawling grounds which stretched to the white sandy beach. It was just as beautiful as the photos online promised and I felt a pang of regret that we only booked one night here. Nevertheless, I was determined to make the most of it. 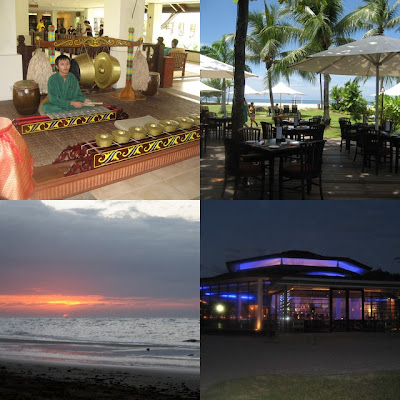 Snapshots of the Shangri La Rasa Ria
After dropping our bags in the room and freshening up, we all met up for lunch at the Tepi Laut where we ordered food a la carte. I had the nasi goreng which actually came from the coffee shop so it arrived last. It was well worth the wait! Later that night we would be committing guiltless acts of gluttony with their amazing hawker-style buffet.
After lunch, some chose to soak up some rays, others opted for a dip in the pool, while three of us headed over to the resort's Nature Reserve to watch the orangutans during feeding time. While I enjoyed watching the whimsical creatures with their curious antics, I was a little disappointed because I thought there would be more of them. Instead there were only three and there were like thirty of us on the viewing deck jockeying for position and angling for a good shot.

Who's watching whom?
We were at the lobby at exactly 5:00 pm to meet the ranger who would lead us through the jungle on our ATVs. We followed him down to the beach where the vehicles were waiting. He briefed us on some safety reminders, handed us shower caps to wear under our helmets and off we went. There were five of us and four of them: one ranger leading the pack, and three bringing up the rear. I wondered why the need for so many, and this was answered soon enough when J got himself stuck in a ditch. 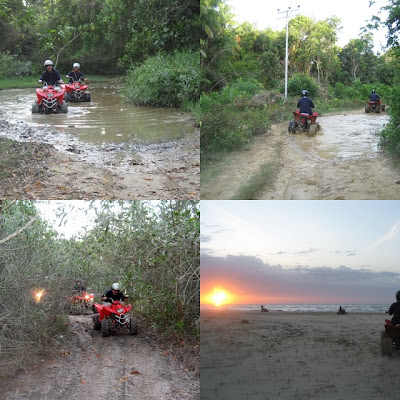 This was, undoubtedly, the highlight of my trip. Can you say fun?!
The next hour and a half was just wild! It felt as if my thumb acquired a mind of it's own as it pressed hard on the gas. The helmets prevented us from hearing anything over the roar of the engines, which only enhanced the experience. We maneuvered our lean mean red machines along narrow and slippery trails and plunged into puddles of mud. Every once in a while we would emerge into a clearing for a minute or two before driving into yet another dense part of the jungle. We passed a herd of cows who didn't seem too happy about the noise barrage we inflicted on them. 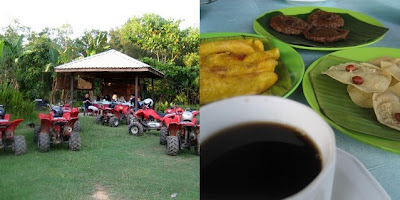 Forty-five minutes later, we stopped at a Badjao village for refreshments. This is where many of the resorts staff live with their families, inside houses on stilts. We washed up using the pails of water provided and then listened as they explained what we were about to eat. I don't remember the names but the tastes were familiar. There were plates of fried bananas, spongy sticky sweets made from flour and brown sugar (their taste reminded me of brown puto) and wafer-thin crisps with nuts. The coffee was strong and delicious. The lady who prepared everything even gave us some cooking lessons and I made my own little spongy cake (if any of you know the names of these sweets, please tell me).

We thanked our hostess and climbed back on our ATVs, ready to take on the more challenging trails. This consisted of very narrow paths that we had to squeeze through and involved a lot of ducking and swerving to avoid low tree limbs and branches that threatened to skin us alive. We made it back to the beach in time to catch the sunset. After taking the requisite pictures, we were given fifteen minutes to fool around with our bikes up and down the shoreline. We raced to the river, drew circles on the sand, and satisfied our need for speed! :) 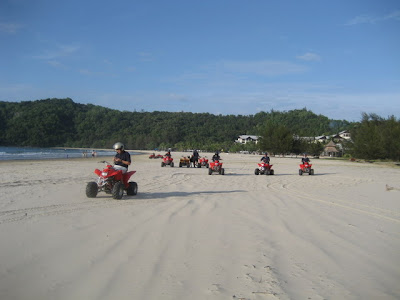 Freestyling on the beach 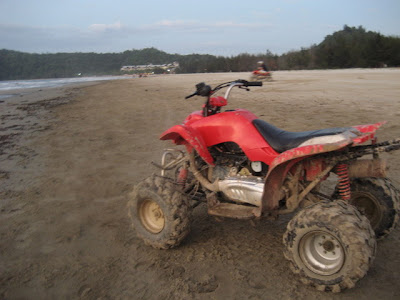 By the time we were through we were filthy and worn. Our legs were caked with mud. Our clothes, hair and faces were spattered with mud and sand but we were happy. We borrowed the gardener's water hose and we cleaned up as best we could before meeting up with the rest of the gang for cocktails at Coast (the hotel's restaurant/bar located out near the beach). 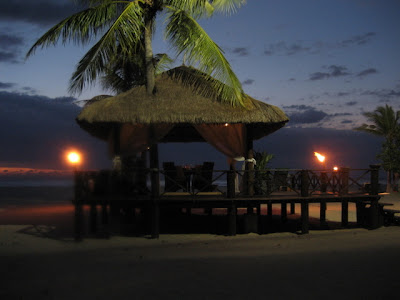 * * *
The next day, while having breakfast at the Coffee Terrace, we met the most colorful member of the resort's staff (below). He pranced around proudly, totally showing-off. He even obliged the guests by posing for pictures. And when no one was minding him, he squawked loud. He was beautiful and he deserved to be noticed! :) 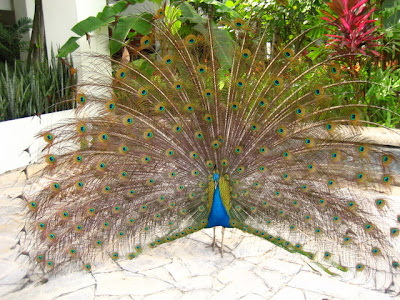 Sadly, it was time to say goodlbye to Rasa Ria and to Sabah. Before we boarded the vans that would take us to the airport, the staff serenaded us with the Rasa Ria farewell song that had us all in tears. What a nice bunch of people! I wouldn't think twice about coming back here someday.
Posted by christine

Hi Christine -- first visit to your site, and I'm having a blast following in your footsteps. I've always wanted to get to KK -- been to peninsular Malaysia, once, and didn't have time to add to our trip. Maybe next time.....

What an adventure! The food, the fun, the exoticness of it all.

I think it's time for a change in choice of holiday. The ATV Safari looks like a real blast!

How fun Nens! The ATV's look like a blast! Woohoo! You are such a speed demon :) I also like the part about you baking the little spongy cake...cute!

Thanks for commenting on my blog. Now, I've found your fantastic site! Your stunning photos make me feel as if I'm there.

Thanks ituloy! Will check out your blog too.

Hi Lydia, I'm glad you're enjoying. :) KK was a pleasant surprise, that's for sure. And best of all, everything is so affordable. So maybe next time indeed. ;)

Hi Rowena! I super loved it. It was wild. We had an ATV in my brother-in-law's beach house a long time ago and while it was fun driving that thing around the beach, it doesn't come close to trampling through the jungle in a 'pack'. :)

Hi Jo! I want to kick myself for not remembering what they were called - those spongy little cakes. In it's raw form it looks a lot like cocojam, and then once fried, it tastes like brown puto- you know the ones I'm talking about? Anyway, it was so much fun! So much so, that during our last dinner we discussed plans for the next trip together. :)

Hi Christine. Glad you enjoyed your KK vacation. I had a great time there too (though I only had a peek at Rasa Ria). Regards. Ajay/Annalyn

Hi Ajay, I just saw your pictures and first post about KK, the one with the mosaic. You saw the mountain on a super clear day, lucky you! :) I'm off to read the next post.

I am keen to book the ATV Safari at the rasa ria, did you book it seperately or from the hotel> Thanks!

Hi Syl, we booked it thru the hotel. It's one of their activities for guests. :)