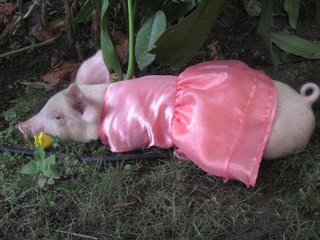 last week we went to the twins' first birthday party. i was told it was going to be en grande and that there would be all sorts of baby animals. my eyes widened in excitement, i love animals and here was a chance to be up close and personal with them. wheeee!

there were more animals than i expected. there were snakes of all lengths and colors. the biggest one was an albino snake, it was yellow in color and seemed to weigh a ton! i put it around my neck for a photo op and noticed that it had a very wierd odor. like week-old sweat.

then i saw the horsey! oh my god what a cutie pie! she was one of those full grown horses that 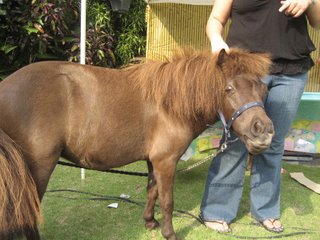 were short. her owner (whose partly seen in the picture at right) let me feed her cotton candy, which she loved.

there were also bearded dragons, what looked like baby porcupines, miss piggy who looked fabulous in her little pink dress, a tiger cub, a baby monkey who came in nothing but diapers, a very old beautiful turtle, a sheep etc.

these poor animals, they were getting ogled, petted, and carried all over the place. fortunately for them, their keepers made sure they were being handled carefully and had their rest periods often so they wouldn't be overwhelmed. 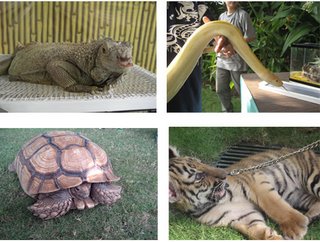 aside from the mini zoo, there were clowns on stilts, a big inflatable slide and a jumping castle, pabitins (bamboo frames from which goodies are hung) , various games and tons of prizes, a wide variety of food booths, and the biggest rotating cake i've ever seen.

all the kids had the time of their lives (and so did we!) .

cool pics,,,,,the whole snake thing though,,,,ughhhhhh better you than me....grrrrrreatttt job on your blog lately. I see you have been a busy bee.

Thanks! I've been enjoying this blogging business actually. :)

Actually, I hate snakes, the wild ones. These ones I know are tame, so I'm kinda ok with touching them and even letting it wrap itself around me for a while.

Now those you see on the streets or in the fields, well that's a whole other story!