Tonight is Spain's first game of the FIFA World Cup 2006! I can't wait to watch it. Obviously, this is my chosen team and always has been, with Portugal a close second and then Argentina and Italy in that order. These are the teams I always root for.

I love football (no not that sport where they throw the ball around and barely use their feet yet call it football *rolls eyes* :) ). I grew up with this game, watching my brother and cousins play since I was a little girl. My brother, Woody, is quite the fanatic. His room was full of football posters (of Pele and Maradona mostly), trophies, medals hanging on more trophies, plaques, etc.

My dad was also a footballer during his time and so was his dad and his dad's dad. I guess it's in the blood. I couldn't help getting into it as well. And if I just had a tad more discipline in my bones, I would have tried out for the college team. But the practices at 6 am stopped me. No thanks. I don't love it THAT much. I prefer being on the stands watching.

In the picture below taken after one of Woody's games,you can see how I couldn't wait to run out to him. I must have been about 4, and my brother about 15 and I thought he was the coolest thing out there. You really don't know any better when you're young. :D 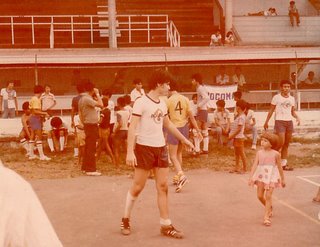 Since it only comes once every 4 years, I have no qualms about losing sleep just to watch the games. Since this year the games are being played in Germany which is 8 hours behind us, that means to watch the games live would be watching at 9pm, 12 midnight and 3am. Luckily, most if not all my friends are fanatics as well so there's always a football party somewhere to go to watch the game live while having some beers or rum cokes. Whether in a bar or the den of someone who was willing to shell out the money for pay per view.

When I was in Madrid for work some 6 years ago, I had the unexpected delight of seeing many of the Spain team's players including Raul, my favorite. I was at a deli buying lunch with some people from our office there, and there was a commotion outside. When we ran out to see what was going on, there were cameramen everywhere. Then we saw the team coming out of a nearby school where they had just had an interview/public appearance. What a thrill!