Guess who's coming to town?!

No no, I'm not talking about the Blackeyed Peas or the Pussycat Dolls, or the Fab5 or David Sedaris (which I'm quite excited about , btw) . I'm talking bigger!

According to the PDI's Business section today, development rights for the Philippines was awarded to The Real American Doughnut Company, Inc. which is owned and operated by the principals of Max's. The first location is scheduled to open by the end of 2006 with approximately 30 in all to open in the next 5 years.

I was still living in London when KKD opened only their 2nd international branch inside Harrods in October of 2003 (first branch outside the US opened in Canada in 2001). I made a beeline for that exclusive building in Knightsbridge and wasn't surprised to see the queue snaking it's way through the food court.

Determined to have my first taste of the kremes that day I fell in line and waited. I didn't have to wait long. They were giving out FREE glazed doughnuts to those waiting in line! How nice of them. 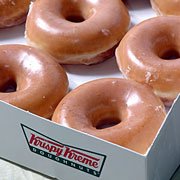 I was not disappointed. They were exactly how I dreamt they would be. It was freshly baked, hot, taken straight out of the greasy conveyor belt and no sooner had it landed on my tongue did it dissolve into syrupy goodness. I was thinking of getting a half-dozen box, but after that experience, I ordered a dozen! (Nice marketing strategy there). Half of which were the original glazed and I sampled some of the flavored ones like chocolate iced glazed, maple iced, creme-filled and a few others I don't remember.

Kinda makes you wonder though. Why, after over 60 years of catering exclusively to the US market, are they suddenly sprouting around the world? Could it be that the Atkins and South Beach diet craze knocked them off their feet? I did read somewhere that KK's revenues dropped significantly following an announcement about the high trans fat contents in its recipes. So they are forced to venture into new, undiscerning markets.

Oh well, bring it on! This is going to be a major test of will power for me.
Posted by christine

I enjoy a good KK donut, but only when it's cold and I can have a hot donut with a strong cup of coffee. Can't say I'm that big a donut fan otherwise. Might have to wait till they open a Baguio branch.

The best part is that I hear their price levels will remain competitive at par with local donut-makers (Gonuts, etc).

When there was talk of Rustans talking over the franchise, it was estimated that they would have to charge over P100 to break even!

Tina, that's great news. They'll never go as cheap as Dunkin but at least at par with Gonuts. Besides, if it were too cheap it would be harder to resist. :)

Ok, a friend just told me of the most disgusting way to eat KK: a Luther burger named after Luther Vandross. A cheeseburger patty between two KK donuts. Gag.

Woohoo! A test of willpower indeed! The first time I tried it was in NY when a friend of mine brought me a box as a welcome to NY present :)

mmmmmmmm Krispy kremes. No beating them when they are hot and fresh. I think you are onto something with the 'why they are now going global' thing. I am not sure if it has to do with the carbs or whatever, but they DO seem to have peaked here and be heading in a downward direction. I know of at least two stores here that have closed down completely.

Mila, eeew! That is disgusting.

Jo, I bet longer queues than those of Gonuts Donuts. Can you imagine?!

Rob, I'm pretty sure it's the whole low-carb craze (which is actually on the decline now) and transfat scare. The low-carb craze is the reason Twinkies and Wonder Bread filed for bankruptcy.

I think it's terrific that they're finally coming here. Perhaps then the debate over whether Gonuts is better than KK and vice versa can finally be put to rest. On second thought, it might just even fuel the flame! :p

Lori yes, people will then be able to form their own opinions as to which is better. I already know my answer to that. :)

Coincidentally, a pilot friend of mine (who just started flying PAL international 2 months ago) asked me out of the blue last night if I had tried Krispy Kremes and if I wanted him to bring me a box from his next flight to SFO. Of course I do!

aside from the low-carb craze, KK
was found to have overstated their financial results in the US. Hence their stock price dropped drastically.

i guess that's the reason why they are expanding overseas now, since in their home market they have closed lots of stores. Although i personally think KK would outlive the low/no-carb diets around...i mean, its human nature, you eat those foods that taste good; and unfortunately, the foods that taste good tend to be bad for the health:D

I hadn't heard about that but it makes perfect sense. And your right, it's the yummy food that's usually bad for your health. Peste! :)

We're in the southern US, not but a day's drive to the home of Krispy Kreme, Winston-Salem, North Carolina. Yet there's not a KK store in our area. It's at least a hour and a half drive to the nearest store.
The local convenience stores and grocery stores sell them, but it's not the same as that hot-off-the-line goodness you get in the stores.

I can appreciate your joy at having a KK nearby!

Hi Lorrie! So nice to see a comment from you. :) Yes, these things are always best hot-off-the-line, but hey i'll take those as well!