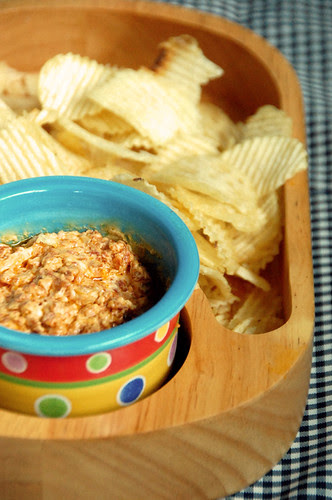 About a month ago, I had 5 kgs. of chorizo hubad (chorizo not in casing) in the freezer. This stash was just a fraction of a bigger order a bunch of us had placed and it was flown in on the first flight from Dumaguete. It's fantastic chorizo! Each time I go to Dumaguete, I return with a few kgs. packed in a box along with my other favorite goodies from there like budbud kabog, tuba bread, danggit, puto etc.

As much as I adore a sinful breakfast of garlic-fried rice topped with spicy chorizo and a fried egg, I can only indulge in such once a week at the most. Any more than that and I swear I can almost feel the fat infiltrating my arteries to gear up for an attack. So I'm trying to have it in slightly smaller quantities, and in other equally satisfying ways: either snuck into a wholesome bowl of lentejas, stuffed into a breakfast burrito or omelette, tossed with some pasta, or tucked into a bun with some cream cheese. The choices are endless and it's been fun cooking with it.

Chorizo is so versatile, it not only makes for a perfect breakfast or part of a main meal, it's excellent as an appetizer or mid-day snack. This cheezy chorizo dip is one example. So easy to make and so many items you can serve it with. (You can even stuff it into a pan de sal for a quick and easy choriburger!)

Cook the chorizo in a pan until the fat begins to melt. Mix in the minced onion and cook some more until the onions become translucent. Add the mayo and cream cheese and continue cooking until the cheese is melted well into the chorizo. Remove excess oil.

Wow! This is such a winner...my mouth is watering!

Yay, you're back blogging! Looks delicious, and such a great photo.

It's yummy, Jo! But then just like bacon, you can't go wrong with this chorizo IMHO. :)

Hi Lorraine! Yes, am trying to squeeze in some blogging spurts here and there. :)

This looks great! I can't wait to have my original longganiza and chorizos! Nothing like the ones made in the Philippines.

OMG you're back! I'm so pleased.

This is the best.. chilly dip!

Hi Christina!! Yes, I'm back and hoping to stay that way ;).

Thank you for all the great posts! This one is explicit. I look forward to reading more interesting topics.

Nice! Happy new year to all, and fingers crossed for a great 2011!

Its Nice idea for easy recipe.Somewhat for a change can eat it as evening snacks.

India has been known for its unique culture and tradition. For a traveler, India always offers a wide variety of experiences at every step. India is filled with attractive travel opportunities from one corner to the other. Replete with spellbinding destinations, India leaves you in awe and wonder.
Incredible India