Peking duck at the source 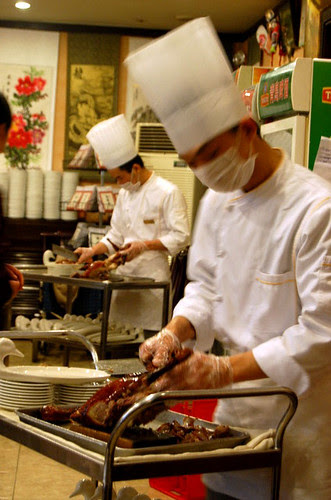 Now what would a trip to Beijing be without a Peking duck experience? It's unthinkable. It's like being there and yet not climbing the Great Wall.

There's something special about sampling your favorite food right in it's birthplace where we can safely assume that only local ingredients are used and that it is prepared in the traditional method. The fact that you are eating among locals and in an authentic setting heightens the whole experience that much more. So while I've had my share of roast duck from Peking Garden in Manila (once a favorite for very special occasions) and Chinatowns both here and abroad, I felt as if I was about to try it for the first time. Peking duck in Peking (now Beijing)! Oohh, I couldn't wait!

There are, of course, several places in the capital where you can enjoy this feast fit for emperors. During the Ming Dynasty, cooks from all over China travelled to the capital to cook for the emperor and many of the recipes invented in the palace kitchen, such as the Peking duck, eventually made it's way to the streets where it was smuggled by the court chefs and prepared in their new restaurants. Among the most popular are Quanjude Roast Duck Restaurant and Da Dong. While the latter was personally recommended by Bee and hence was my preference, a roast duck lunch in one of the many Quanjude Roast Duck branches was already included in our tour.

The restaurant was already packed when we arrived, and several chefs were were out on the floor busy carving the shiny roasted ducks for their diners. I quickly noted that we were the only foreigners there, or at least it seemed that way, which to me is always a good sign. We were led upstairs to another dining area to a large round table reserved for our small party of four. Our pre-ordered food arrived shortly after we were seated. There was a plate of sweet and sour pork, a plate of shiitake mushrooms with bokchoy which I adored and some breaded egg rolls. And then it arrived. The Pièce de résistance. 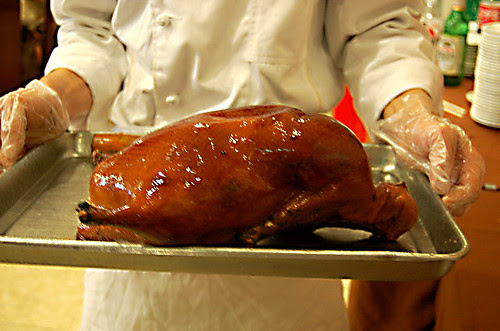 Wheeled to us was the duck, in all it's shining glory. Like an oiled-up body builder flexing his ab muscles, the duck poufed it's crisp, fatty skin for us. I felt my salivary glands kick into 4th gear. After he presented it to us, the chef lay it down on his pushcart and began to skillfully carve the bird, ensuring the perfect balance of skin with a bit of meat- crunch & succulence- in each piece.

Preparing a duck for roasting involves the process of pumping air under the skin to separate it from the meat. The chef then meticulously massages the skin to make sure it is evenly loosened and there are no holes which might allow air to escape. The duck is basted with hot water to tighten the skin, dried and basted again with a sweet mixture before it is hung to dry, a process that ensures a crisp skin . The cavity of the duck then gets stuffed with a secret blend of spices before it's left to roast over a wood-fuelled fire. 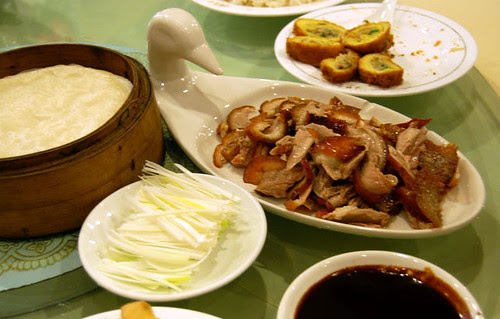 We were served Peking duck 'three-way', in three courses. Naturally, the first (above photo) is my favorite because it involves the outer layer of the duck - the skin! A waitress lays the slices of duck on the table with a plate of slivered scallions, the steamed pancakes and hoisin sauce. She proceeds to demonstrate how to assemble the pieces together in a nice roll with her chopsticls. There must be different ways to put this together, but how I like to do it is to spread hoisin sauce down the middle of the pancake with a spoon, add the duck and some scallions, drizzle a tiny bit more hoisin, then fold the bottom part of the pancake up and over before folding in the 2 sides toward the middle. The small bottom fold helps prevent the sauce from dripping onto your shirt. The hoisin sauce here isn't as sweet as the ones I'm familiar with but I liked it just as well. I could almost hear my arteries groaning with each bite, but they were drowned out by the crunch. It was exquisite and I couldn't get enough of it!

Tougher times have taught the Chinese to use up every part of the duck, not letting anything go to waste. So after the duck is nicely carved in your presence, it is returned to the kitchen where the remaining meat - that which is not attached to any skin - is thrown into a stir-fry while the bones are used for a consommé of duck broth; the second and third courses in the Peking duck three-way. We tried these as well, but we kept going back for the wraps.

So I climbed the Great Wall and I had Peking duck at the source. My Beijing experience was now complete. Well, almost.

If you haven't yet tired of my 2 month-long series on Beijing, please stay tuned for my last two posts - some Beijing street food and more on the dining scene. :)

My mouth was watering! I LOVE peking duck too and the photos made me crave!! Must have duck this week!

And did you notice that the white oblong plate containing the Peking duck skin is shaped like a duck? Hanep!! ang cute! :D

looking forward to those last 2 posts!

As you know this is my most favorite dish in the whole world! Thanks for featuring it.

My mouth is drooling. Peking duck is my all time favorite disn . If I would have to have a last supper - this would be it, bar -none. The crispy skin....ooo--lala. The best i had was at Spring Deer REstaurant in Hong kong. Ofcourse , I could imagine that the best would be in the mainland.

Ginny, take me with you!

GUS, that plate is really so cute! But it would have been cuter on my dining table. ;) hehe

Oggi, *drool* is right! My mouth was watering when they wheeled that duck to us. :)

Veron, Peking duck is a great choice for a last meal! An entire one to yourself, you'll be dying anway, might as well die happy. :)I've actually heard of Spring Deer in HK but have never eaten there. I'll take note of that.

I am obsessed with duck in all its forms. I'm now trying to figuring out of all the duck recipes to try at home, what to do first.

Duck must be my favorite meat -- I usually zero in on it when I see it on the menu. (Hmm...could that have something to do with the fact that I love its liver so much, as well?) Your pictures made me crave! So, was it really much better than the Peking Duck you've had everywhere else?

This post just got me warmed up! Bring it on!

Wow, pecking duck from pecking... You have me craving for duck wraps so bad right now.

Franco, I hope you post about that. I'm looking forward to it! :)

Katrina, it tastes just as good as the best I've tried elsewhere. My friends didn't think so though but I think that may be because they're not used to the sauce. But the duck itself is sublime! Super juicy, succulent and the skin was perfect! Oohh now I'm craving for it. :)

Ruy, I got myself craving for it as well! Looks like we might be bumping into each other at the nearest roast duck place? ;)

Oh delicious! :) I've been to this restaurant and feasted on their duck. I got a headache after. Hahaha!

Toni, haha, all that cholesterol can do that! :) But the headache was worth it, no?

Well, another story worth to be published in a travel magazine!
Superb photography !

you forgot to mention that the duck should be sliced into 100 pieces..thats according to the documnetary abt peking duck by discovery channel.
i sitll cant get over the fact that ming tsai did it in 1 hr(ironchef america duck battle).. i wish i could have taste his creation
here in the phils. the best peking duck i had was in China Bistro at Libis...
--Sakai--
restauranthopping.blogspot.com

Haha thanks Sidney! :) Your photos are an inspiration to me.

Hi Sakai, I didn't know about the 100 pieces, I wonder what the significance of that is. Very interesting, thank you for sharing that. :)

To have Peking duck in Peking must have been so wonderful! I love reading your travel posts.