Pastimes at the Temple of Heaven 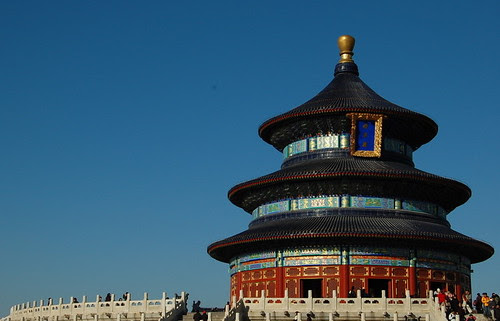 Barely three hours after touchdown and happily sated with our first taste of Chinese food in China (more on the food in future posts), my friends and I headed for the Temple of Heaven. This temple complex, which is the largest in China, reflects the ancient Chinese belief that Heaven was an ominpresent god of nature that governed everything under the sky, hence it was the venue for many sacred rituals and ceremonies to ensure good harvests.

The most striking building in the complex is the circular Hall of Prayer for Good Harvests (pictured above and below). It is built on the precise location where heaven and earth meet, as determined by feng shui masters. it is beautiful! Even more so up close. The glazed tiles under each eave glistened in the sun against a backdrop of azure sky, stunning in it's beauty and splendor. I must have stood there for a good five minutes just staring before I took my first photograph. 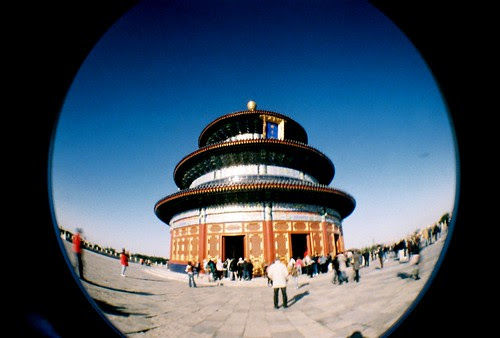 At the top of the steps you are treated to a 360 degree view of Beijing. Until recently, this was the tallest point in all of the country. No one was allowed to build higher. Visitors are only allowed a peek into the hall, but it is enough for one to be amazed at the level of craftsmanship. The detail is just exquisite! The vaulted ceiling is about 36 meters high and was slotted together without a single nail. The relationship of the Chinese lunar calendar and agriculture is shown in the pillars surrounding the hall. The central four pillars represent the four seasons, for example, the next 12 pillars around them represent the 12 months, while the outer 12 pillars denote the division of the 24-hour day into two-hour units or shichen. 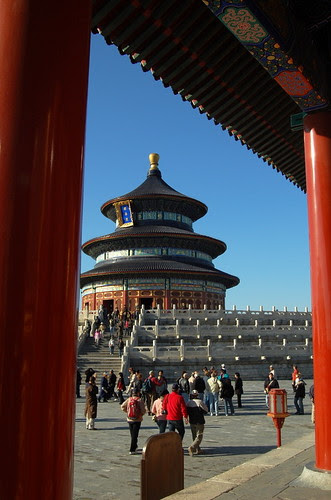 Thousands of 100 year old cypress trees lend a serene atmosphere to the park that surrounds the temples. It is no wonder then that the park has become a favorite among the locals for recreational activities or simply to just daydream or ponder the sayings of Confucius. Now I am accustomed to seeing mostly fellow travellers when visiting popular tourist attractions, with tour guides and hawkers being the only locals around. So you can imagine my delight at finding a significantly large gathering of locals within these walls. I think they even outnumbered the tourists! 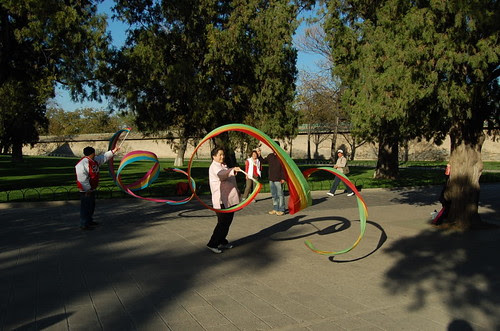 By the east gate there was a couple who was joyfully twirling their batons of rainbow ribbon and just beyond them was an old man in serious tai chi mode. Kites danced above the tree tops in the distance and children bundled-up tight in padded winter clothing waddled after each other in a game of tag.

But the best surprise of all was the long corridor. This 350 meter long covered walkway was once used to carry slaughtered sacrificial animals to the altar. Today, there are no slaughtered animals to be found. Instead, the entire length of the corridor is flanked by locals in groups or pairs and even solitary individuals engaged in typical Chinese past times. Many are gathered in rowdy card games which seem to require the slapping of cards on the bench. Young and old alike are bent over checker boards, their brows furrowed in intense concentration, contemplating their next move. Nearby, a lady shows off her knitting to admiring passersby. 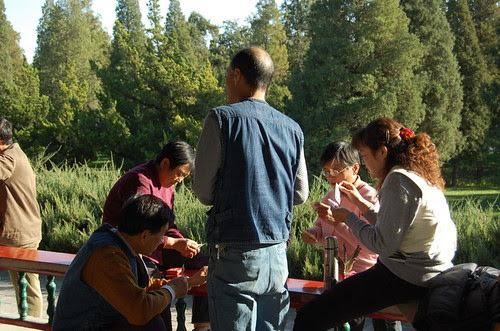 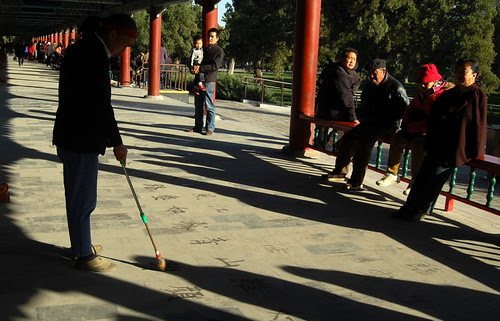 In another section, a man practices the ancient art of calligraphy on the floor. Just a few feet away from him people are making music together; they are dancing and beckoning for us to join them. Further along I notice an old man, his face deeply lined with wisdom and inscribed by time, with silver medicine balls which he rolls around in his hand. 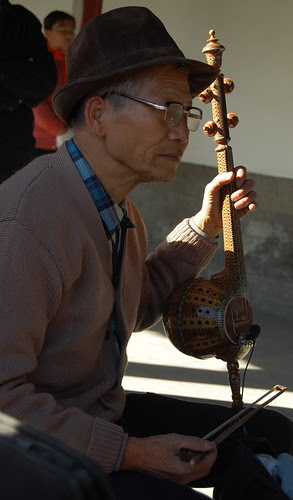 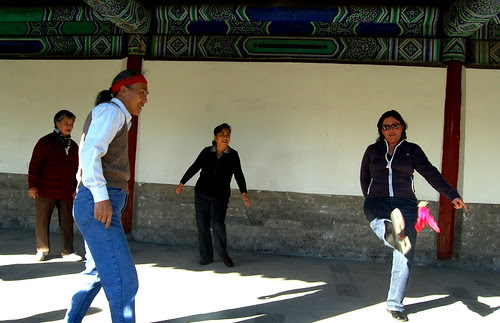 Yet another old man in a brown fedora plays the erhu, a two-stringed musical instrument. He gives me a warm smile after I sneak a picture of him and returns his gaze to the group playing with a jianzi or Chinese hackysack, a popular game using a shuttlecock. Before I knew it, my friend (that's her with the sunglasses) has jumped in, much to everyone's amusement. She's actually good at this!

That was how it was along that corridor. Everyone seemed happy, at peace. Basking in the simple joys of life and welcoming you to do the same. :) 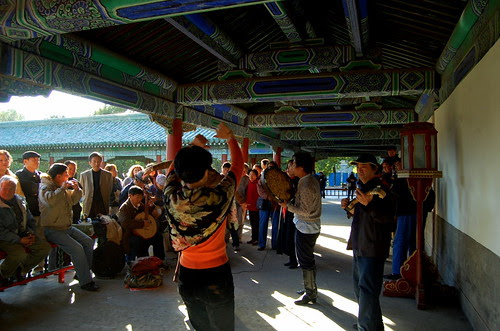 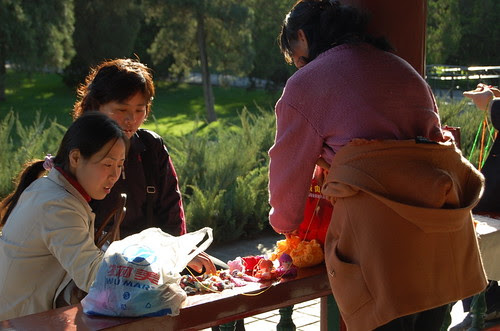 What a beautiful post... It totally brought me there.

Again you've written this in a way that transports. And your photos! I especially like the one up top, where the blue of the sky seems to perfectly match the blue of the temple's tiles, and also the old man with the balls in his hand. Lovely post, Nena!

Stunning photos! I very much enjoyed the narrative and learned quite a lot. This perspective on heaven and earth is quite beautiful. Thanks for sharing this insight.

Thank you, Ruy! :) Thanks for dropping by too.

Thanks Katrina! I love that photo too. :) And I'm so glad we had a clear day with a blue sky - our last 4 days in Beijing were gloomy, all grey skies and smog.

Thanks, Sandy! I'm glad you enjoyed the post and photos. :)

Beautiful pics again Christine. And great details on the story. I have friends who visited the same temple but I didn't get the same sense from their stories.

So glad you posted this one Nena! Of all the many palaces and temples in BJ, the temple of heaven was always my favorite. My favorite time to go is at dusk, they light up the long walkway to the temple, and I used to day dream how I wish I could be the empress there, look up at the stars, listen to the crickets, and watch the sun go down on the treeline. Just me and my palace hehehe. I think all the trees there make it far nicer than the Forbidden City. Watching kite flyers is also very relaxing no?

It was well worth the wait for your China post. The narrative and photos are stunning! I can't decide which is my favorite photo...they're all beautiful and I love them all!:)

Hey Cols, yes just the start. So many more posts to work on. I hope to get the next one up by tomorrow. :) Don't you just love your jianzi pic?! Banca and all! haha

Thanks Christina! So nice to see you around. Are you back home from Mexico?

Mila, I can totally picture you doing that! Empress Dowager Milagros. :) Wow, I can imagine how lovely it would be there at dusk, my favorite time of day. You're right about the kite flying, very relaxing.

Aw thanks Oggi! :) I'm so flattered you liked the photos that much.

I'm in the middle of my Mexico trip. Got sick sick sick for most of it so far though! It's getting better now though, come stop by my blog. xxoo C

I was really transported and imagining all you experienced. Galing!

you take such beautiful photos!

Great photos. I want to go there too.

Oh no, Christina, I'm so sorry to hear that! I hope it didn't ruin too much of your trip. On my way to your blog now. Hugs! :)

Thanks, Mirs! Was a fantastic trip to say the least. :)

I loved this post Nena! Aside from the Temple of Heaven being absolutely gorgeous, along with your photos of it, it must have been so nice to witness and be amidst all that local activity and fun :)

Your photos certainly do justice to the beauty of the building! And seeing those what those people do with their pastimes, well, it certainly makes me realize why Chinese culture has endured so long.

Hi Joey! It was really nice, especially since I wasn't expecting that. And of course C is always a hoot, she's such a fun travel mate! :)

Thank you, Ivan! So nice to see you here. It's amazing how the Chinese have preserved their culture, it makes me wish we were better at it too.

Gorgeous pictures...I have been to Beijing so many times so those pictures look so familiar to me. :)

Lovely post. Reading this really brought me to Beijing. Thank you.