I had recently mentioned in Mila's blog that I grew up with Polly Garilao's chocolate cake. It was always present in all our family functions whether they were held in our own home or taken to somebody's else's. For many years, it was the most convenient, not to mention delicious, choice for dessert as the Garilao's lived only 3 blocks away from where we live.

I don't normally like chocolate cakes because most of those I've tried are dry and fluffy and I'm usually just disappointed. But Polly's chocolate cake is so moist and dense, with the perfect chocolate icing.

Because it is simply one of the best chocolate cakes in the city (even earning a sweet spot as one of the 10 best desserts in Manila by Lori) and was rapidly gaining popularity, we were always asked to bring it to potluck parties. It became known as the 'Merville cake' or among Merville residents it was simply 'the Garilao cake'.

What many don't know though is that it comes in another version: with mocha icing. Polly calls this the Brown Derby (P375 for the 8x8, P490 for the 8x12). It is the same chocolatey heaven but with a slight twist. This is perfect for people like me who have gotten a little tired of the original cake after all these years and crave for something different. 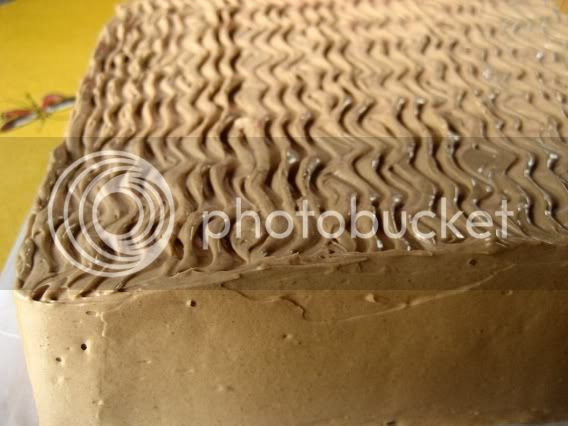 The brown derby gets mixed reviews from my friends...there are the staunch loyalists and purists who possess an unswerving devotion to the original cake; then there are those that prefer the complementary flavors of mocha and chocolate.

I personally love having both options to bounce back and forth from!

Ooohhh...This is exactly what I hoped the cake would be when you mentioned it on Mila's blog! Mila and I were talking about this last weekend and we both agreed we want it to be be mocha-frosted outside, but chocolate inside.

I don't think they sell Polly's other cakes in Shell. But fortuitously, my siblings' kids are about to start school in Merville, so dropping by the Garilao house will be very convenient! Can't wait to try the Brown Derby, thanks, Christine!

That looks great! Sorry I missed it...

Katrina, that's great! Now you can have it as often as your heart desires. :) I think the icing would have been better if it were of the sticky, gooey consistency of the original chocolate cake's icing. I'm really curious to hear what you all think about it when you've tried it.

Joey, you were missed! You'll have to tell me how your dinner went. :)

Christine,
You have an awesome blog:)) I loved reading your posts. I have to be truthful though, haven't read all of them, but will be back for sure. Actually after I started drooling reading about the chocolate cake, I havent been able to read much. Must eat chocolate cake...slurp...
Oh..and thanks so much for the link on your blog. Hope you don't mind if I add you to my blogroll.

Hi TP! So nice to see you here. Thank you so much for the nice words. :) Of course, I don't mind at all if you add me.

I am not much a cake fan myself. I would rather just eat ice cream or brownies...you do make this cake sound good though. Thanks for checking out my blog. I hope you do come back and I will be reading yours too.

Hi Tracy, thanks for dropping by! I love ice cream too, but then again I love anything that's sweet. I will definitely be visiting your blog often! :)

I think all the discussion about mocha made me buy a cup of mocha chip at Dairy queen yesterday. Not as good as a chocolate cake frosted with mocha, but close.

Thanks for posting about the cake, Christine!

oh, wow! that looks certainly yummy!!!! i'll check that out.