The Twin Lakes of Balinsasayao 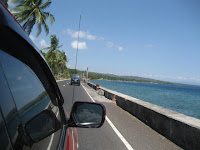 I don't know why I had never been up here before. I thought that I'd seen all there was worth seeing around Dumaguete, but how wrong I was. The island is so rich in natural beauty that apparently much has yet to be discovered and developed for visitors.
It was my brother who had first told me about the Twin Lakes of Balinsasayao, and how I should make it a point to go this time. He had never been either, but had heard so much about it. So I sent my cousin a message and she agreed I shouldn't miss it. So she gladly arranged everything. It was too bad my brother couldn't come earlier to join us.
They picked me up at 9 am, armed with a bag of assorted junk food and a cooler filled with ice 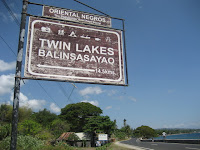 and drinks. We made a quick stop at the Swiss deli (a product of the surge in foreign residents in the city, I was pleasantly surprised with their items which would rival those of Santi's!) to pick up some sandwiches she had ordered for our brunch and we were on our way. The first half hour of the drive was familiar, it was one I loved. We drove north along the coast to the town of Sibulan, before turning west to ascend the mountain.
The view got more impressive the higher we went. I could see Cebu in the distance across the sea. It was a clear day with a few tufts of clouds here and there. In some places, it was hard to tell where the sea ended and the sky began. It took my breath away. Chapel on the hill: Sto. Nino Cambaloctot
We stopped briefly at this cute pink chapel on the hill. It was empty. There are five rows of pews on each side of the aisle that leads to the altar made of rock. Behind the altar is a grotto with the statue of the Virgin Mary. I am told that the chapel is built on the very spot where a group who was doing civic work for the villagers in the area had seen what, for them, could only be explained as a miracle. The sun began to spin in a whirl of color, almost blinding them, spinning and growing bigger as if coming closer then receded again. Then the sun split in half momentarily before becoming whole again and continued to spin and dance. This went on for about 10 minutes, during which the group stood staring and praying. The entire story is also painted on a wall next to the chapel. the grotto behind the altar
We continued our way up the winding gravel road for another 20 minutes. We drove past the sign pointing to the first of the twin lakes, Lake Danao,the smaller of the two. We arrived at Lake Balinsasayao soon after. Until only recently, one had to hike up the mountain to get to the lakes and depending on the hiker's stamina, the hike could last up to 2 days. No wonder I had never been up there before, there wasn't a road yet then. We parked the car at the side of the road near a sign which was the only indication that there was a lake hidden beyond the thick forest. We were about 1000 feet above sea level and the air was balmy. As we trudged down the rocky steps, the lake slowly came into view. It looked like a painting! My first glimpse of the lake

The lake was much bigger than I expected and so much more beautiful. From where I was standing, the view reminded me very much of the Swiss countryside. I half expected to see a chalet nestled among the trees across the water. In fact, I have a picture which I took from the train to Interlaken that looks just like that one above but with a Swiss chalet on the foreground. It was simply gorgeous!

There were only two other groups there aside from the local bankeros (boatmen) so it was relatively quiet and gave you the feeling of seclusion. There are kayaks, bancas (outrigger canoes), pedal boats and cottages for hire at very reasonable prices. We hired a bankero who, with strong and seasoned arms, rowed us around the lake while we sat back and relaxed. It was so peaceful with only the occasional sound of birds and the whoosh-whoosh of the oar in the water. My cousin's husband told us about how he and his buds would hike up to this lake way back when and they would set up camp on the shores across on the other side where we saw the remnants of a camp fire. Some of them would sleep on their bancas, under the stars, lulled to sleepy by the tiny ripples on the water. They would have boat races in the nude just for the hell of it. Ahh yes, the days before Brokeback Mountain. Heehee.

The boatman tells us that by 5 pm the fog starts to roll in and the temperature plummets. All around us the water is different shades of green, like an emerald glinting in the sun. We see a heron swoop down low near the water's surface, barely skimming it before soaring back over the treetops. The lake is surrounded by lush vegetation and when we were close enough to land, I saw giant ferns, the biggest I'd ever seen. After about an hour, we stopped for brunch on the other side and ate while my nephew swam in the water. The water was cold so none of us waded in after him. We were content to sit on the rocks with our pastrami sandwiches and apple streudels and the view. Another fabulous adventure! Thanks for sharing this special place.

Great photos of the lake! This is one of those places not too many people have heard about though ... so it's great that you're promoting it!

Wish we were there with you. The boys would have had a blast!

That place looks like heaven. I'd have loved to plunge in (especially nowadays in this heat). How much trudging did you do to get from the road to the lakeshore? And where did you get those sandwiches?

Hi Lydia! You're welcome. It was fab indeed, I love these outdoor adventures. Thanks for dropping by. :)

Hey wys, thanks! You're right, there's so much our islands have to offer apart from the usual hot spots. :)

Gins, I wish too!!! I kept thinking about your kids and imagining how much fun they would have had there! Next time! :)

Hi Mila! Are you proud of me? I rushed this post out for you hehe. There wasn't much trudging to get there, it was the trudging back UP that seemed to take forever! The sandwiches are from a new deli along the boulevard of the Swiss restaurant, Le Chalet. They've got everything, wines, cheeses, deli stuff, very impressive. :)

Fantastic shots nens! Especially of the lake which is just so beautiful! I swear, there is so much of our country I still want to explore :) I echo Wysgal...great job on promoting our gems!

(I so would have stole those inihaw na manok!)

Beautiful place and your photos are superb. Philippines, yay!:D

You really have a way of making me want to go wherever it is you've been to. The picture of the lake is breathtaking! I was never a nature girl (you still can't make me go mountain climbing), but more and more I'm appreciating -- sometimes, even craving -- being in places like that.

By the way, the church's story sounds a lot like that "dancing sun" event in the late 80s. Remember, when they said there was going to be three days of darkness, and that Judiel Nava was thought to be some sort of saint? (I heard, by the way, that he used the money that was donated to open a beauty parlor, and then later to get a sex change?!)

Joey, I actually asked if the chickens were for sale, how embarassing!! The guy just kind of smiled at me, too embarassed also to tell me that was his family's lunch haha. Oh god.

Katrina, I'm just relived my influence on you is actually positive! heehee Me naman, I'm a big nature lover, but in the heat we have here, it's a bit difficult. Which is why I love the ocean and anything near water. :)

And omg, your memory is impeccable! Of course I remember that scam, we were victims! We rented a van to try and get there but never made it past Bulacan I think. We were stuck in the biggest traffic jam to ever hit the country. It seemed everyone was hit with the same foolish idea. But I am so impressed you remember his name!

it's only on tv where i first saw this...hope to hope to visit this one for real in the future...

Wow! This place looks super nice! Thanks for sharing it with us!

My memory is actually very spotty. But for some reason, there are things that stick. Weird things like that, for example! ;-) I never actually believed it. I'm such a skeptic, always looking for a scientific explanation. True enough, they figured it out eventually.

Oops! Tutubi, I could have sworn I already did. Apparently I only added you to bloglines and not here like I intended. Thanks for reminding me! :)

Di, you're welcome. It's my pleasure to share these places, especially hidden gems such as this. :)

Katrina, at that moment I wish I were more of a skeptic! But at that time I didn't really need much convincing to go anywhere. Just like now, kaladkarin, hehe.

beautiful place indeed! was only able to see this late last year.