The first time I had feijoada (Brazilian black bean stew) was at a graduation party hosted by my two Brazilian friends in their flat off Oxford st. in London. They had prepared a veritable Brazilian feast but the feijoada took center stage as it usually does at most Brazilian feasts. It was accompanied by other typical cuisine from the land of samba y gol and everything was chased down with glasses of caipirinha or wine. The second time I had it was at a Brazilian restaurant across from where Jerry Springer: the Opera was playing. I had insisted on eating there before the show started and was so glad I did because it was to be my last feijoada for a while.

Feijoada is a black bean stew that is typically served with side dishes such as rice, fried collard greens and presented with orange slices which is used to counteract the fat of all the pork thrown in the feijoada. The bowl is then topped off with a soft cheese which they like to call Romeu e Julieta.

Marina & Malena's feijoada was very chunky, replete with beef, salted pork trimmings, bacon, sausages and other parts of the pig I couldn't recognize. It was not soupy but there was just enough of the soup to cover the everything and then some. This was no wimpy little thing, it was thick, and heavy and strong. It was incredible and it knocked my socks off! It went beyond the gastronomic frontiers of anything I had ever experienced before. As if that wasn't enough, they handed me a basket of cheese rolls or pão de queijo which sent me over the edge. At first glance I thought they were ordinary rolls because they had nothing on them or in them. Oh my, they were heavenly, so soft and still warm from the oven. The flavor was just right, not too subtle not too overpowering.

Sadly both remain elusive to me. The one and only "Brazilian" restaurant in the country does not even have it on the menu, ? Well, I f I wanted to have some again, I had to make it. I resisted for a long time, worried I would ruin one of my top 5 things to eat before you die, but I couldn't wait any longer. I had half a dozen recipes but they usually just varied in the types of meats thrown in, and their quantities. For my first attempt, I did not want to overdo it so I chose the recipe with the most variety of meats (feijoada completa), and cut down from there. Keeping to what I had on hand and what I could easily find at the deli that day. Feijoada
adapted from this recipe 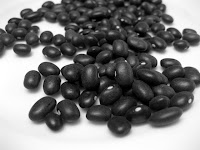 In a large heavy stock pot, heat the oil over medium heat. Add the onions and cook, stirring occasionally until translucent. Add the garlic and cook a little more, until the aroma is released. Add the bay leaves, parsely and thyme along with the all the meats and the water. Bring slowly to a boil over medium heat, then reduce the heat and skim the fats and scum from the top.

Cook for about 30 minutes then add the beans. Simmer for another hour. As each piece of meat becomes fork tender, remove it, starting wiht the beef and finishing with the salted meats. Place the cooked meats on a platter , cover with aluminum foil and keep warm in a low oven.

Continue cooking the beans for 20 minutes more, or until tender. You can either serve the meats and beans side by side on a platter, or mixed back in all together in a big bowl. I prefer the latter. The feijoada was very very good and I was very proud of my first attempt. It was chunky and thick and heavy, just how I wanted it. Hearty, comfort food, sould food. The best kind. But there was still some room for improvement as I felt there was something lacking but couldn't quite put my finger on it. The flavor wasn't as strong as how I remember the others to have been.

The pão de queijo, though perfect in flavor, did not come out as soft as I hoped. It did not melt in my mouth like Malena's and Marina's did. Even after the recommened time in the oven, the insides did not bake well through so I had to keep it on a little longer. This is the recipe I used and most of the recipes I've seen and bookmarked are identical, but I obviously did something wrong. I used cassava starch which is our equivalent of manioc starch that all the recipes called for. I could try using tapioca starch next time, but isn't that just the same?

If any of you reading this, have any experience in making either of these dishes, I would love to hear from you and would appreciate your comments and suggestions. Thanks in advance! :)
Posted by christine

The first time I tried feijoada was at a Brazilian restaurant in Boston. It was a revelation!

I will believe you but I have some doubts... ;-)Not sure I will like this.

Lydia, that's a great word for it, a revelation! :)

Haha Sidney, don't knock it til you try it. Is it the blackness that turns you off? Or the heart-attack inducing fat content? :)

My mouth is watering. I will definitely try this for a Sunday Dinner.

On another note, the Miso salad dressing is typically available in any Japanese grocery like Sakura or the little ones in Little Tokyo near Makati Cinema Square. (Is that place still alive/)

You did it! You did it! Good for you Nens! I can't believe how excited I am...it's just that we have been talking about it for so long :) I wish I could have a taste...Mmmmm...HINT, HINT! ;)

btw, they both look great and the feijoada looks just like the one I had too!

Knittymommy...MCS is alive and well and Carlo is always there! We live really close by and new Japanese groceries have sprouted :) I will look for that dressing...sounds like I'll like it!

Knittymommy, let me know if and when you try it, k. :) Yup, like Joey said, MCS is still there. Still a sorry looking mall but the best source for movies and tv series'! We go to Little Tokyo a lot because one of my favorite Jap restaurants is there - Kiku Fuji. But we like going with our friend who knows the sushi chef well and gets tons of freebies! I'll look for that dressing when I replenish my Kewpie supply.

Jo, arentcha proud of me!? :) Finally no? The bread needs improvement, which is why I didn't send you any samples first. I'll try it again soon for sure, I need to get it right or I'll go nuts! :)

Hmmmm...you think there might be feijoada at a restaurant in Portugal? I'm making note of this for my trip next week!

I never had Brazilian food before. Portuguese, yes, many times at home and restos. I might try to cook the bean stew but those cheese puffs are definitely a 'must' make.:)

Rowena, I'm positive they do! Just ask for it, they'll at least have some sort of feijao (black bean) stew, even if it's not exactly the Brazilian type. Let me know please if you do find it. :) When are you going? I've always wanted to go to Portugal!

Oggi, I'm gonna wait for you to make it! You replicate recipes perfectly, I'm sure your cheese rolls will be far more superior to mine. Then I'll copy your recipe after that hehe. :)

Hi Garrett, so do I! All kinds of beans actually, especially when made into thick stews/soups. :)

I just stumbled across your blog and have to tell you that I LOVE the name of it :)
The recipe sounds yummy, really yummy.

Hi Annika, thank you! And welcome to my site. :) Glad you dropped by, because in doing so you've led me to your lovely blog. I'm off to explore it!

Oh yeah NOW i remember why I don't visit your blog at 1 o'clock in the morning.