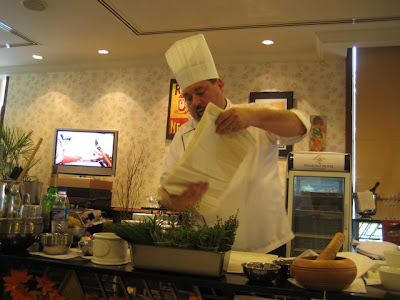 The word bistro conjures up cozy images of friends or lovers sipping wine in between bites of simple and traditional French food. Bistro fare is not haute cuisine nor is it modest cafe food, it falls somewhere in between. According to Chef Jean-Pierre Migne, Executive Chef of Restaurant Le Bellevue at the Manila Diamond Hotel, there are four basic types of French restaurants: the cafe that offers only drinks, the guingette which is an old cafe that is usually situated on a river bank with a dock for dancing, the bistrot or small restaurant serving simple traditional fare and the brasserie which is larger and more elaborate than a bistro.

I learned all this and more during a French Bistro Cooking class I attended last Saturday thanks to Vina, who offered me her slot because she felt I would appreciate it more. I can't thank you enough, Vina, you're such a sweetheart! I was happy to see familiar faces such as Nina, who I first met over at BootsnAll and had dinner with while Christina was in town and Rachel, Anton's wife. We shared a front-row table, a basket of croissants and a hunger for good food. 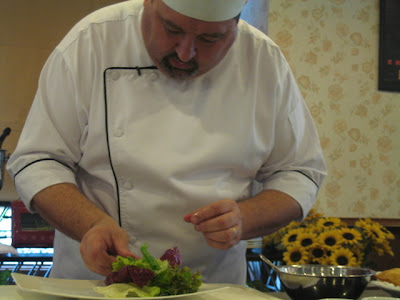 The class was headed by Chef Migne, a jovial Frenchman with over three decades of culinary experience spanning three continents. He has prepared state dinners for the King & Queen of Spain, Pres. George Bush and Prime Minister Shinzo Abe and also prepared an elaborate banquet for the APEC summit. He entertained us with his delightful sense of humor and savvy manner in the kitchen.

He showed us how to make four typical French bistro dishes, two appetizers, a main course and dessert. Shown below are the finished products, clockwise from top left:

(Should you want the recipe of any of the above items, let me know and I'll be happy to e-mail it to you.) 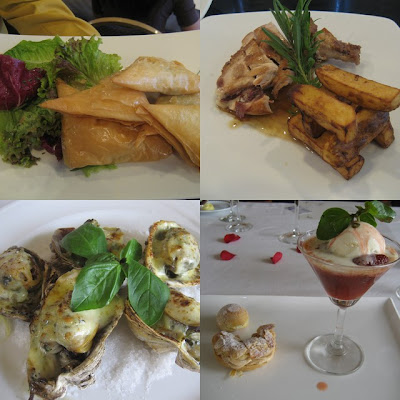 Although it wasn't a hands-on class, I learned a lot from it. Chef Migne was generous with his advice and encouraged us to ask questions. Here are some things I learned during this session:

He emphasized that recipes are merely a guide and not meant to be followed to the tee, unless of course you're working on pastry. I agree. Everything we make should reflect our own style and personality and champion our uniqueness. We should be flexible and allow our creative juices to flow while we cook.

After the three hour session, we were escorted upstairs to Le Bellevue at the 27th floor for lunch where we dined on the bistro fare that Chef Migne had previously demonstrated but which were prepared and plated by the skilled kitchen crew. During lunch, I had the chance to get to know some of the other attendees, such as Ajay who was kind enough to coordinate my attendance. After lunch, there was a simple ceremony wherein we wore our aprons and toques and had our pictures taken with the Chef as he handed us our certificates.

As if I didn't already feel extremely lucky for having attended Chef Migne's class and partaking of the superb lunch for free, my name was drawn from a bowl and I won a gift certifiate from Jewelmer too! Yay!

This is only the second in a series of International Cuisine Culinary Classes organized by the staff of Manila Diamond Hotel. Future classes include Japanese cuisine with Chef Junichi Sekiyama and Thai & Vietnamese cuisine wtih Chef Mel Taylo. For more info, you may call the hotel at +632 5283000 and look for Bernie.

Oo, could you post your picture with the toque? :)

With the luck you had on Saturday, you should have bought a lotto ticket!!!

Wow! This looks and sounds like it was a lot of fun. Great tips at the end. I'll certainly put some in place. Amanda

Sounds fantastic! I would love to learn from a French chef :) Thanks for sharing the stuff you learned!

I second M's request for a photo of a be-toque'd you :)

Mila, haha, I should have gone to the casino! The Hyatt was right around the corner, tempting.

Hi Little Foodie! It was really fun, the chef made it fun, he could be a stand-up comedian. :)

Joey/Mila, I will show you my be-toqued self, for your eyes only. :D