Wats in every corner?

There are over 30,000 buddhist temples or wats in Thailand, and Bangkok is home to some of the most important ones. A friend of mine emailed me with some Bangkok tips adding, "you see one Buddha, you've seen 'em all". I had to disagree, each one turned out to be unique and different from the previous, just like the wats that housed them.
Normally I tend to shy away from packaged tours. I don't like being a slave to a tour operator's time as I prefer travelling at my own pace, affording ample time for all my senses to absorb the surroundings without being herded like cattle (I swear sometimes that's how it feels) to the next attraction. But what I dislike most about these tours is that there is always a visit to a place presented as an "attraction" when really, it is nothing more than a tourist trap. These are usually factories of some sort where you are given the priveledge to see how their wares are made before they quickly usher you into a showroom where they make you feel obliged to purchase something.

So when our hotel package came with a free half-day city tour I was hesitant at first. But it was so hot in Bangkok that the idea of going around in a private air-conditioned van for at least half a day was too tempting to resist. With barely enough sleep the night before (we arrived at the hotel past midnight) and lethargic after a heavy breakfast at the hotel buffet, we climbed into the grey van with our tour guide, a nice Thai lady who had a thick local accent we had difficulty understanding most of the time.
I had wrongly assumed the morning's itinerary and was not a little disappointed to learn that the wats we would be visiting were not the ones I hoped it would be. I was really looking forward to visiting Wat Pho and Wat Phra Kaew, but because it was a free and optional tour only, it was pretty much take-it-or-leave-it and so we took it. I never did find the time or energy to visit these two temples later in the trip so they are among my new list of 'reasons to re-visit Thailand in the future'. 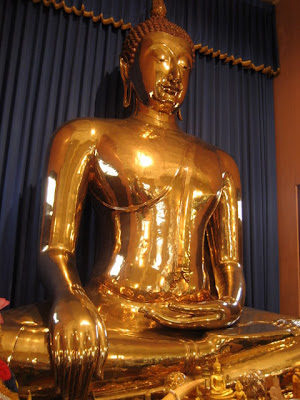 Our first stop was Wat Traimit, the Temple of the Golden Buddha, in the Chinatown district of the city. Inside what seems like an unremarkable temple structure, sits a most remarkable five and a half ton solid gold (!) Buddha. We stood in awe and barefoot humility before this shiny 15 foot structure that stared down at us with mother-of-pearl eyes.

The story goes that it was cast during the Sukothai period sometime in the 13th century and was later covered in stucco to prevent it's plundering by the Burmese and then left to be forgotten. How you can forget about something of this size and worth (it is supposedly worth around $14 million today!) is beyond me. It was only much much later in 1955, while the plastered image was being moved to it's present location that it fell from a crane to reveal the golden image inside. Imagine their surprise!

It was here that I first learned about the significance of the different buddha postures. We listened as our guide explained that each posture or mudra depicts a period in the life of a buddha. If they are sitting, he is in a state of meditation or teaching. If the right hand is pointed towards the earth resting near the knee (as this one's is), the buddha is believed to be subduing demons. A reclining buddha represents his death and passage to nirvana, symbolizing complete peach and detachment from the world. If standing, the buddha image is bestowing blessings upon those before him but if depicted in a walking stance, this signifies his return to earth from heaven. 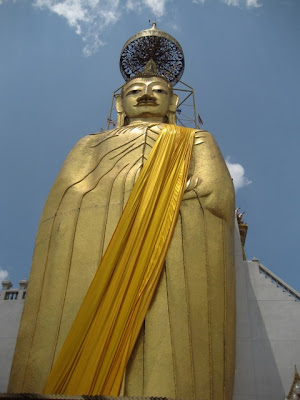 Though not nearly as awesome, Wat Intharawihan (or Wat In), or Temple of the Standing Buddha is worth a visit only if you have extra time. Even as I stood before this gigantic 32 meter tall buddha, I regretted not seeing the others instead. After I took some photos from afar, trying to fit the whole image into my lens, I swooped in for a closer look. Sometimes the beauty can be found in the details as in this case. Upon closer inspection I noticed that the buddha's 'skin' is made up of tiny mosaic glass pieces which resembled the scales on a fish. I found the buddha's feet to be the most amusing part, with some toes as if pedicured with pretty flower designs. 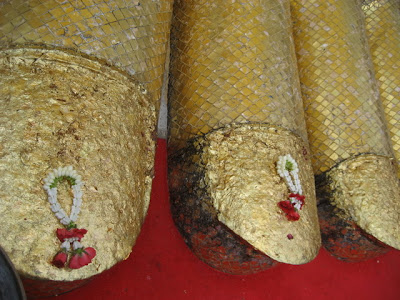 What made my trip to Wat In worthwhile was seeing this saffron-robed monk just inside the temple grounds. From his mouth came a soulful incantation as children listened and prayed along in front of him with their eyes closed and palms pressed together under their chins. It was really a unique vision, and the serious-looking children added to the charm. 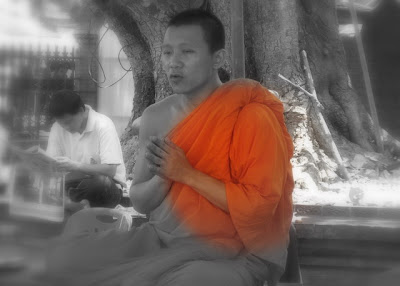 Our free half-day tour ended with the requisite trip to a tourist trap - a gem factory which was not worth writing home about, so let's skip that and move along to yup, yet another wat! And to my favorite wat so far.

Only three of us made it to Wat Arun as the others chose to get a head start on some shopping. Our taxi driver managed to get us to our destination after a series of wrong turns and frequent consults with other taxi drivers (isn't this supposed to be like a major landmark?). Upon catching our first glimpse, we let out a collective "wow" and stood in stunned silence before finally rushing down the alley to the gates. It was beautiful! 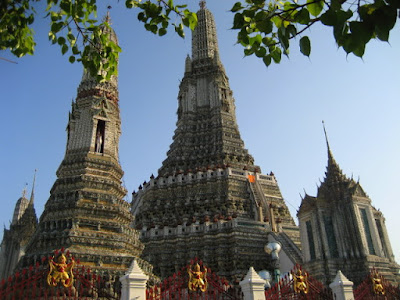 No picture of this wat, also known as the Temple of the Dawn, could ever do it justice and it definitely does not prepare you for the micro view. The details are stunning! The temple is named after Aruna the Indian god of dawn and consists of a central prang (Khmer-style tower) that is about 70 meters high known as the Phra Prang and four smaller corner prangs. Though most postcards usually portray this temple's beauty against a spectacular sunset from across the Chao Phraya River on the east bank- its spires creating a most impressive silhouette , one should not miss a chance to walk among its grounds and up its steep steps. It is only when you are near that you can see the intricate details on it's surface. 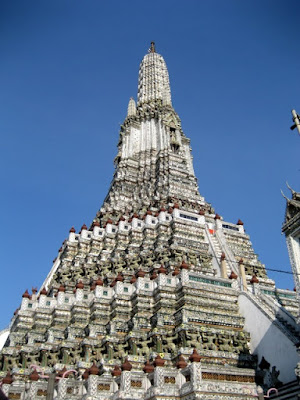 The prangs are decorated in delicate patterns using porcelain and fragments from old Chinese boats. My guidebook told me that Wat Arun was restored during the brief Thonburi period to be the Royal Chapel of King Taksin. Once upon a time it also played host to the Emerald Buddha before it was transferred to it's present location. Climbing the super steep steps rewards you with vertigo-inducing but breathtaking views of the river. As I turned to face the steps and make my way down, I once again faced my newly-discovered fear of heights. Since when did going down become harder than climbing up?! I had to go use the other set of steps where no one was blocking the side, otherwise I would have had nothing to hold on to as I made my way down. 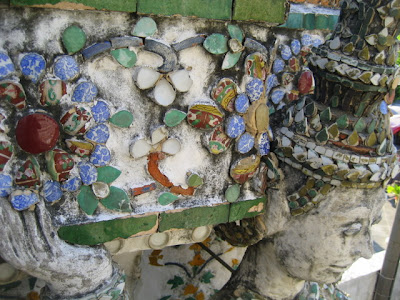 check out the details on this thing 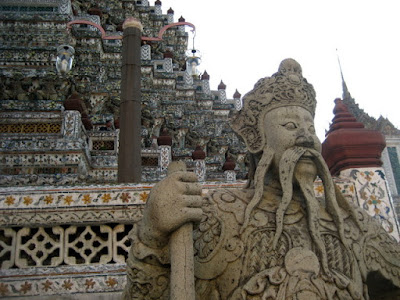 We walked around the tranquil temple grounds for a while as the sun was setting and we stumbled upon more monks and some spirit trees (picture on my previous post). If a shaman has determined that a spirit lives in a particular tree, that tree is wrapped in colorful scarves and cannot be cut down. Bangkok is filled with them. Another insteresting symbol of the Thais belief in spirits are spirit houses, which I initially and ignorantly mistook as a bird house the first time. I read somewhere that the shamans are usually made to 'assess' properties to see if any spirits currently live there before anything could be built. Should there be spirits, a spirit house is built within the property for them to keep them happy. I shudder to imagine what it would be like to live among angry and displaced spirits! 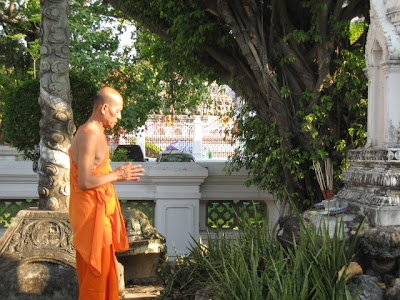 I think the 3 buddhas were quite different :) But I like the pictures of the monks and the stories of the spirit trees and spirit houses! How nice it must be to be surrounded by things like that :)

The level of detail is incredible! Did you go to the Grand Palace? I saw my friend's pictures of it... WOW! He and his wife are both art directors, and when he saw how intricate and beautiful it was, he said he felt like cursing its creator in envy! ;-)

Jo, you should have seen me with the monks! Everytime I'd see one, it was like a celebrity sighting with me as their biggest fan. You'll see a picture of a spirit house in my next post. :) They're adorable actually, and I wish I took more pictures of the others I saw.

Katrina, NO! Ugh, the Grand Palace is in the same compound as Wat Phra Keaw which is one of the two I missed out on. You can imagine now how super disappointed I was. On our last day, we had a free afternoon before having to go to the airport, but the heat was so unbearable I couldn't even get myself out on the street to hail a cab at this point. It had drained us of all our energy finally, so we sought shelter at the malls. (nyar)

Great pictures here. They make me want to board the next plane to Thailand!

Sidney, go for it! Cebu Pacific is having their crazy P1.00 promos again, you should! You would have the most amazing pictures to bring home!

Your wonderful photos and essay remind me of my Bangkok visit 20 years ago and made me browse through my photo albums. My friends and I had a photo taken in front of the gold giant sitting Buddha and realized people were actualy praying, we were so embarassed. And people were picking at the loose gold leaves of the Buddha, then they put them carefully in their wallets. I must have taken pirtures of 5 or 6 different Buddhas, one of them is the butt of the humongous reclining Buddha.

Hi Oggi! We did the same, taking pictures with the buddha while people were praying to it. But I think that's inevitable because it's a popular tourist spot. They didn't seem to mind, and we tried our best not to block them and took our pictures mostly from the side. :) So I'm sure you didn't offend anyone. I wonder about those gold leafs now, if that's a tradition or were they vandals?