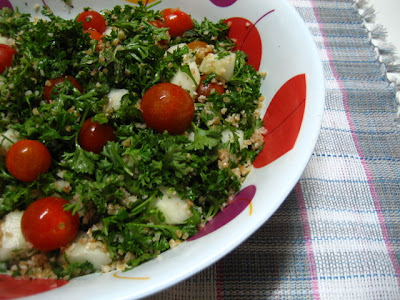 My first encounter with tabbouleh was at my aunt's cabin in Tagaytay many moons ago. It was Christmas night and as is tradition, we celebrated both the holidays and my aunt's birthday there with the rest of my mom's side of the family. It is a reunion of sorts because many of our relatives from Spain and the US are home this time of year.

I always looked forward to these gatherings, when I get to han 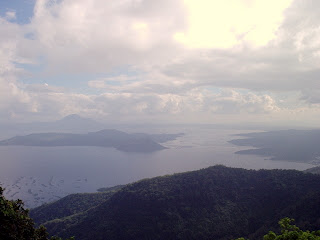 g out with my cousins at this beautiful house on the ridge with the sprawling garden and viewing deck overlooking one of the more beautiful vistas in our country, Taal lake and volcano. Scenery so beautiful, Patricia Schultz deemed it worthy of a spot in her book 1000 Places to See Before You Die.

The party was always held in the garden so prettily decorated with Christmas lights. Being up there on those cool December nights meant resurrecting those rarely-used sweaters and coats from the back of our closets. I loved it. Us city-folk don't get to cozy up like that very often.

Dinner was always catered with not a few additional homemade dishes thrown in for good measure. Since my aunt's husband is of Lebanese descent, there was always a big bowl of tabbouleh on the buffet table. I remember being excited to try it that first time because it was 'exotic' to me then. But at the same time I was anxious. I mean, this is made with garnish! Is it really edible? I couldn't wait to find out.

I greedily filled half my plate with the stuff, so sure I would finish it all. That was my first mistake. My second mistake was plowing a big spoonful (not a dainty forkful, mind you) into my mouth. Oof. I couldn't chew. My jaw refused to budge. The taste and aroma of the parsley was overwhelming. The texture was too strange. It took all my will to chew and swallow what I had in my mouth. As I did, I contemplated ways of making the rest of the 'gunk' on my plate disappear. I watched how the others on my table were eating it, some pinched bits of it with pita bread, others mixed it with the viands already on their fork. This was when I realized my third mistake. Sigh, it was too late now. My tastebuds threatened to revolt and I couldn't eat another bite for another, hmmm, 5 years or so.

Fast forward to Portland, Oregon. At the apartment of my brother-in-law's relatives (they're Lebanese too). We had driven down from Vancouver, BC for the weekend. There was a horrible heatwave then, but that's a story for another time. While there, I was treated to ringside priveleges in the art of Lebanese cooking, a cuisine I already had a fondness for thanks to my sister and brother-in-law. It was during one of these busy moments in the kitchen when I saw the pile of parsley on the chopping board. That much parsley could only mean one thing.

I am a strong believer of second chances. Especially when it comes to food. We all have our share of certain foods we despised as a kid but now love. How I love squash and okra now! So there I was at the table already happily chowing on hummus and baba ghanoush with the rest of them, when they passed the bowl of tabbouleh to me. Portion control! I reminded myself, as I carefully transferred some to my plate and grabbed 2 more pita wedges. Perhaps because I learned from my mistakes and also because I'd like to think my tastebuds had matured, I can say I actually liked the stuff. I wasn't doing cartwheels from sheer delight, but it was alright. Feeling triumphant, I rewarded myself with a couple of puffs on the sweet sheesha (hubbly bubbly or hookah, if you prefer).

Today, I'm still not a huge fan. If you had told me I would be voluntarily making tabbouleh for my own consumption at home, I would have asked what you were high on and if you would share some with me. But I had way too much parsley in the crisper and not enough time to consume them all. I figured this was as good a time as any to have my close encounters of the third kind with tabbouleh. Yet another salad I've made with my stash from the Baguio trip, which includes delicious cherry tomatoes.

The recipe called for flat-leaf parsley but I only had the curly variety. After consulting with a few recipe sites online, I was happy to learn that both varieties are acceptable so I went ahead and chopped those babies up. I served it as a side dish with warmed pita bread. How did I like it? It was not bad at all. What I would suggest to do differently though is up the ratio of bulgur to parsley.

Great post! I'd definitely increase the amount of bulgur and cut way back on the parsley. Especially if the parsley isn't absolutely fresh from the garden, because the flavor chanes rapidly after it's been harvested. Good for you, though, for giving tabbouleh a second -- and third -- chance!

I like parsley in moderation but I wouldn't mind eating tabbouleh in Tagaytay in a garden overlooking the lake! :-)

I was never one to go for this dish either...but I'm getting tempted now. There is a lot of food that "grew on me" as I grew up :)

Where do you get your bulgur?

When I have herbs I use I usually make them into a pesto...lots of herbs can become good pestos, not just basil. I have a recipe for mint and parsley pesto for the next time you have a glut (or your can mix them with basil or arugula) :)

I'm a freak for parsley, both italian and chinese, so the first time I tried tabbouleh, I was like WOW!!! But if you ever asked me what I was high on, I'd have to admit that it certainly is green (joke). ;-P

Thanks Lydia! You're so right. I immediately realized the ratio was a bit off. I would definitely prefer more bulgur to parsley. :)

Sidney, I think anything would taste better with a view like that, right? :) But same here, I prefer my parsley in moderation, which is why I have taken to eating this merely as a side with bread, and not as a main salad.

Hi Jo! I get my bulgur in Santi's, but it's labeled as crackwheat there. I never thought of making it into pesto, good idea. I do have an arugula pesto recipe that involves pine nuts & parmesan that I've been wanting to try out. :)

Haha good one, Rowena! :) What's the difference between Italian and Chinese parsley?

Okay, I feel better about not liking parsley now. ;-) I just never understood its appeal. It took me a few tries before I appreciated tabbouleh too, and like you, I prefer more bulgur and less parsley in it. But arugula...now that, I'm crazy about!

Hi Christine! I really enjoyed reading your post. And as a parsley-lover, I have always enjoyed tabbouleh--make it all the time. It's so light, fresh, and healthful. Yours look delicious!

BTW-How did you get those strawberries not to fall over in the last post's pic? ;)

Katrina, me too! In London, where it was more familiar to me as rocket salad, I had it practically every other day mixed in with other greens. I love its nutty flavor.

Hi Susan! I took that picture at the market actually. :) I loved how they arrange them so neatly like that in tall piles. But I don't know how they do it.

Parsley is high in vit C, and great for eating after a garlic heavy meal (to cleanse the palate). I do have a fondness for tabbouleh though - whenever I have a surfeit of parsley and when I find a box of bulgur, I will make myself a week's worth of tabbouleh. My recipe is generally like yours (you know me and my inability to follow recipes). I don't eat it alone though, goes well with grilled meat, or tuna sashimi (or just add good tuna chunks to the mix). Or moosh it with hummus and roasted garlic. Half a cup and your tummy is full. Good diet food!

Mila, that's right! They even have parsley breath sprays. You've just made me crave for hummus with roasted garlic, I think I'll have to make some tonight. Perfect since I just bought some whole wheat pita pockets yesterday.