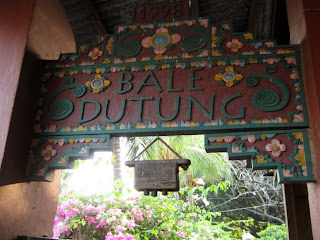 What happens when a bunch of folks with an insatiable hunger for the good life filled with good food set off on a food trip together and have a great time?
They immediately plan another one! And that we did. This time our bellies pointed us north to Pampanga, to Bale Dutung (literally wooden house), the home of Claude Tayag - national artist and writer by profession, chef by passion.
There were 22 of us in the Digiprint bus, making the actual trip there doubly fun. The atmosphere was charged with everyone's excitement for the culinary journey that lay ahead, and we all seemed to be yakking at the same time at some point. When you're having fun, time really does fly so that before we knew it, we arrived at Bale Dutung, barely scraping through the narrow streets of the village.

Claude and his wife, Mary Anne, were the most gracious of hosts. They regaled us with stories about the house and how it took almost 10 years to build, slowly but with loving care. As we listened, we milled around a round table replete with butong pakwan (dried watermelon seeds) and boiled peanuts. Just off the dining are was a little bar that had a seemingly endless supply of buko (coconut) juice, iced tea, beer, water, and soft drinks with a bartender helping to scoop up the ice and do the pouring. The table was beautifully set, and here we were ushered to by Mary Anne before they brought out the appetizers. 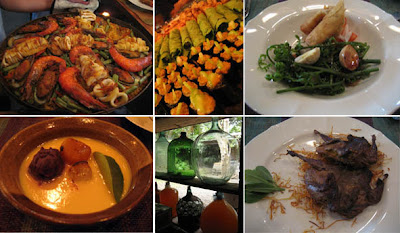 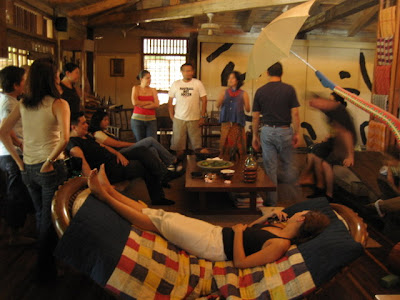 Nothing like a slow afternoon on a full tummy

After lunch, we strolled around the house marvelling at all the pieces that he salvaged and collected all these years. Many of Claude's feria (fair) pieces were scattered around the house, lending a fun and festive feel to the place. He welcomed us upstairs and into his living room and office where we got to see where his genius is put into canvass and paper. We were surrounded by interesting pieces of furniture designed by Claude such as the rocking daybed inspired by a tennis racket (see pic above). We walked on floors made from wood from bowling lanes and amidst whimsical floor lamps and one-off chairs. This was like his own private gallery of sorts.

The artist in his office, and his other work stations 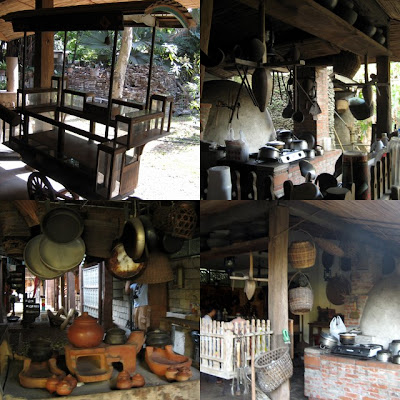 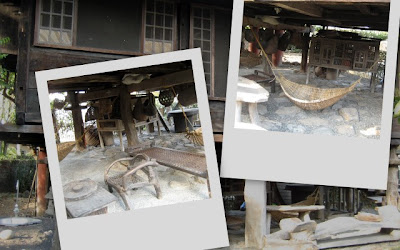 Before we finally headed out at almost 5:00, Claude autographed copies of his book and brought out his bottled specialties such as his XO (for extra-ordinary) sauce, pesto, taba ng talangka (crab fat sauce) and balaw-balaw (fermented rice). (As an aside: we were also in the company of another cookbook author, Catherine Jones, who cowrote the books Eating for Lower Cholesterol and Eating for Pregnancy) .

Because we couldn't make ourselves eat any more that afternoon, we decided to skip the other restaurants such as Zapatas, VFW, Cottage Kitchen , C, etc. for another time, and opted instead to buy some pasalubongs (gifts to take home). So we stopped at Susie's, home of the best tibok-tibok - a delicious and creamy white pudding made with carabao's milk and Rosing's for some yema and pastillas de leche (milk candies).

What we couldn't resist though was a quick stop at Margarita Station , fondly called "the ville" by the locals for some margaritas before heading home. The place was huge, and the Friday night crowd was pouring in. I had a jumbo glass of strawberry margarita which I shared with Joey. That hit the spot. Tired but happy, we toasted to yet another successful food trip, and I could almost hear the wheels in our minds whirring as we planned the next. I can't wait! :) 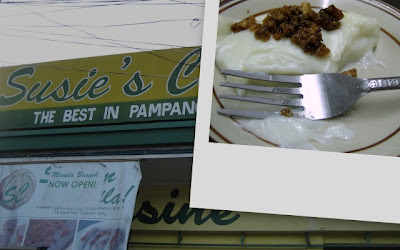 It just gets better every time, doesn't it? Must be because we enjoy your company so much! And what a PERFECT idea the bus was, thank you for that! (I love Spanky's name for it: The Foodship Digiprint) The chatting and laughing together on the way to Pampanga, and the snickering over "Point Pleasant" on the way back were definitely some of the high points of the trip.

Our next port of call should be an overnighter. Or an overseas trip (HK or Singapore, or Bkk, or Hanoi, or....Mongolia!!!)

What a trip! I wish I knew like-minded foodies around here that are always game for adventures in dining. Unfortunately, most of our friends are just not into anything weird. Boohoo... Love all of the photos, what fun!

You're welcome Katrina. :) I really loved that we were all together and had that extra time to chat on our way there.

Haha and there I was at first thinking everyone had fallen asleep on the ride home because no one was talking, when I turned back and saw all your faces transfixed on the tv screen. heehee

Hi Rowena! I do count myself lucky to be a part of this fun group with the common love for good food. :) Next time you come home, it would be nice to plan another that you can join, no? You would definitely enjoy it I'm sure. :)

I had a blast! I love these food trips :) Thanks so much for fixing our Foodship Digiprint! It was really a big part of the fun :)

Am I the only one who found Boyd's baliktad head visions freaky? I'm still a bit takut...

I will post what I did with the XO sauce this week then link up all your posts! I have to say, I am totally addicted to that sauce!

Wow! This is passion for food!

Hey Jo, that sauce was pretty good. Can't wait to see what you did with it! What about Kusina Salud for the next? Or even a return to Pampanga for the rest of the restaurants we missed out on. :) You know me, I'm easy!

Sidney, yup! That's something we all share. You should join us next time! :)

Christine! I envy you guys! I bet it was a blast! Sigh...

I love the food pics!!

By the way, your link to Anne doesn't work; it links to Spanky. :-)

HI Di,thanks, it sure was! I really do consider myself lucky to know such a group of fun, warm and like-minded folks. :)

Oops, thanks Katrina! I fixed na the link. :)

Looks like a fabulous way to spend the day.

Hi Cate! It truly was. :) But really, as long as you're with good company, it makes for a fabulous day. Thanks for dropping by! :)

we should do another trip! with the same bus! hahahaha

miss you all,
anne

i'm from pampanga but i've never heard of rosing's. where is this? i'd like to sample these goodies over the holy week =)

Hi Kai, it's right next door to Susie's on Hilda St, at Nepo Mart. If you can't find it, I'm sure if you ask around Angeles City someone can direct you to it. :)

You keep on bleating about this bale dutung. Question: Where exactly in pampanga is this over-hyped bale dutung? Anybody who came with these twenty people bother to post the address of these place? or are your mind and stomach so addled?