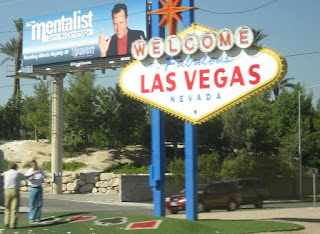 was never on my list of places to visit. I can name over a hundred other places I would rather spend my money traveling to before I even considered Vegas. It didn’t matter that friends who had been there raved about it, or that I was hooked on shows like CSI or Las Vegas with cutie Josh Duhamel. It’s in-your-face glitz and “fakeness” did nothing for me.

The main purpose of this leg of my trip was to meet up with my sister and my niece who I hadn’t seen in almost 7 years. They were flying down from so we could spend 6 glorious days together! We decided on Vegas for our reunion because it was not too far for her and was en route for me, but more importantly because neither of us had been there so we would share in this discovery. Shortly after we made our decision, she informed me that my cousin’s wife and her daughter were coming along as well. Two of my favorite aunts were also coming down from , but staying with friends away from The Strip Yay, the more the merrier! I couldn’t have been more excited!

It was bittersweet leaving . I felt sad saying goodbye to Sheila but I was also extremely eager to see my sis and niece. So after one last hug and a promise from her that she would come to Manila very soon, I was off to the 'Entertainment Capital of the world'.

Barely an hour after take-off, we started our descent into McCarran Int'l. Airport. From my window seat, I had a bird's eye view of The Strip and recognized the pyramid-inspired Luxor Hotel, the towering Stratosphere, and the replica Eiffel Tower of the Paris Hotel. Pretty impressive. But my attention was involuntarily drawn to the brownness, flatness and bleakness of the desert that surrounded all that. The absence of any greenery or body of water was startling and slightly unnerving. The taxi made its way to the Polo Towers where the 5 of us were staying. We rented my friends timeshare, a one bedroom suite, complete with kitchenette, dishwasher, breakfast table and living area. The location was excellent! Right in the middle of the strip between the Aladdin Hotel and MGM Grand. And as a bonus, we had a pretty nice view from our balcony which included the fountains of Bellagio. (pic at right)

I had plenty of time before the rest arrived, so I unpacked all the stuff I brought for them from Manila which occupied half my suitcase. A lot of it was sent by the rest of my family. I freshened up and went to get something to eat and to explore my immediate surroundings. Directly in front of us was the Hawaiian Marketplace. Here I discovered Kapit Bahay, a fast-food Filipino restaurant, which has delicious longganisa (Filipino sausages).

Our other neighbors were Walgreens, McDonalds, 7-11, CV Pharmacy, the Harley Davidson Cafe, and M & M World. I made a beeline for Walgreens. I'm like a kid in a candy shop in there. After about an hour of scanning every shelf top to bottom, I went back to the hotel armed with fruits, muffins, Krispy Kremes, juice and other breakfast items, then took a quick nap.

I don't remember what time I closed my eyes, but I woke up with a start and without checking my watch I hurried down to the lobby. Strange I know, but there they were! I nearly wept with joy! We hugged for so long, individual bear hugs and then a group hug. It was one of the happiest moments of my life.

That afternoon, we explored the Desert Passage Mall in the Aladdin Hotel. I loved the whole Moroccan souk-inspired theme going on here. After shopping and a dinner filled with laughter (my sister is a hoot and a half!) at Max's Cafe, we went back to the hotel to wait to wait for the rest, my cousins wife and her daughter, who were arriving on the evening flight from Vancouver. I was meeting them for the first time. They turned out to be loads of fun! 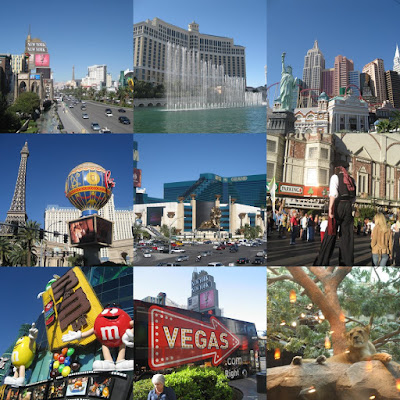 The next 5 days were a blast! We shopped, gambled, ate, walked, marvelled at dancing fountains, sighed at couples in gondolas, made faces at Simon Cowell's wax figure, posed by the Arc du Triomphe, guzzled margaritas, walked some more, bought Coca Cola and M&M souvenirs, stuffed ourselves at a buffet, rode a limo, gawked at lions, window shopped at The Forum, saw Elvis, watched a light and sound show downtown, walked the streets of New York, ate kung pao chicken in SoHo, watched a volcano erupt, wasted away at Margaritaville, walked the gardens of Bellagio, had oyster shots... Now what was that again about Vegas not being my kind of town? heehee

Vegas has something for everyone, no doubt about that. Party place. Shopping haven. Gamblers paradise. Foodie heaven. But it can be overwhelming. By the end of the 3rd day I was ready to run from the Strip with arms flailing around me. Thankfully, my moms friends invited us for a very pleasant lunch (NOT on the strip) and drove us around the suburbs. It was a much needed break from the craziness. 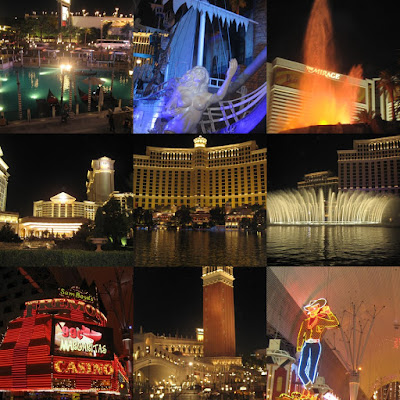 Some of the famous chef's restaurants: 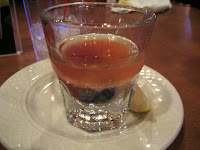 My first oyster shot - I loved it!
Posted by christine

oh, nena. ilooooove vegas! its a pity the last itme i was there i was like 8 mos preggy. they wouldnt let me on the rides.... but after seeing your pix i will most definetley be heading back soon ;-) love the pix-- all of it! lokks like you all had a great time

What on earth were you doing gallivanting in Vegas 8 months pregnant?! I swear, only you Mirs. :) I did have a blast, the company being the major reason for it!

hahaha- i myself have no idea...it may have been the hormones making me do strange things ; but i do look back fondly.
whod youy go with?

I can only take 2 days of Vegas before I get a headache. Too many lights, and few places that don't scream buy/gamble/excess. Getting to be a foodie place though. Major chefs opened up branches recently.

MrsA, I was with my sister, niece, cousins wife and her daughter. We also met up with my aunts who came down from Vancouver also. Sandra V spent my entire bday with me. :) That was so nice of her!

Mila, thank you for reminding me! I forgot to add the pictures I took of some of those restaurants (now added btw). Unfortunately, I didn't have a chance to try any of them because for most you had to book way in advance, and many of us were also on a pretty tight budget.

I already know what I'll be doing should I go back to Vegas someday: See the Blue Man Group perform, watch O, take a helicopter ride to the Grand Canyon and dine at Guy Savoy's & L'Atelier to name a few. :)

Yes, you have to do a Cirque du Soleil show when in Vegas, there's the new one based on Beatles music.

I LOVE LAS VEGAS!! I enjoy everything about the city! I was able to spend a week in Vegas 5 years ago and I loved it! I can't wait to go back! I miss the buffets, the lights, the sights, and everything about it. There's just something with Vegas that I like - maybe it's the mobsters thing. Hehe..

I have never been to Vegas...it does look like it can short circuit your head after too long with the lights, hehe :) I can imagine the fun you had! "Wasted away in Margaritaville..."...I'm so glad :)

Mila, yes, LOVE! That would have been good too! There's about 6 Cirque productions going on at the same time in Vegas right now: Love, Zumanity, Mystere, Ka the Celine Dion one, and "O" that I remember. I've only seen Saltimbanco in London but I thought it was the greatest show ever!

Candisshhh, I didn't think it was possible to have any grey feelings about Vegas. I thought you either loved it or hated it. (but I was wrong since I don't love it nor hate it) We all know where you fall under! :) Surprisingly a majority of my friends share your sentiments, though none of them will ever choose to live there.

Ohh Jo, remember the excitement I unleashed on you when I discovered the Margaritaville in Vegas?! I was not disappointed. :)