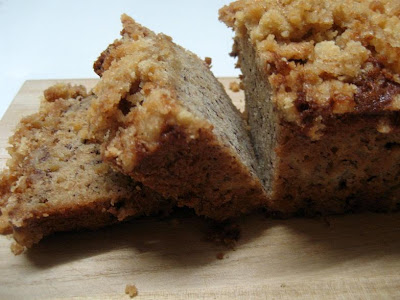 I have a confession to make: I am a banana bread snob. There aren't many I've tried that I genuinely like. In my opinion, all banana bread/loaf/cake/muffins can be found at either one of the two extremes on the flavor pole: dry & bland or moist & delicious. Even if they are ok, yet don't measure up to those in the moist & delicious camp, they might as well be banished to the other end of the pole because I won't waste my calorie count on them (IF I was counting calories heh).
My sister used to make banana bread that was the bomb! I haven't had it in years because she moved to Canada 15 years ago. (mental note: bug her for her recipe!). A few years ago at a cooking and recipe forum I used to be active in, someone had posted this recipe and a promise that all other banana bread recipes would pale in comparison. The reaction for months after was nothing short of a craze. Everyone who had tried the recipe gushed about it, prompting its inclusion to the forum's recipe hall of fame.

All of this, I discovered happily later, was well-deserved. It became the definitive banana bread to which I have since compared every other one to. I have had this recipe for over 4 years now I think, but I regret not taking down the name of the lady who originally shared it with us so I can give her credit it now.

I prefer my loaf to have a streusel topping because I love the added crunch so that part is my own addition. You may choose to omit this, of course. 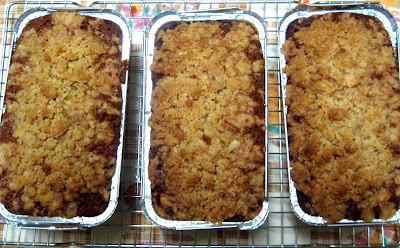 Grease and flour loaf pan (or muffin pan). Stir & toss together flour, salt, baking soda then set it aside. In a large bowl combine butter, sugar, eggs and bananas. Add the combined dry ingredients until batter is thoroughly blended. Pour into a greased loaf pan. Sprinkle with the streusel topping.

Check center for doneness with a toothpick. If it comes out clean, it's ready. Remove from oven then let cool for 5 minutes before inverting.

1/2 C packed brown sugar
6 T all-purpose flour.
4 T butter
2/3 C chopped walnuts
In a small bowl, combine the sugar and flour. Then using a pastry blender, cut in the butter until the mixture resembles coarse crumbs. Stir in the walnuts. Sprinkle this on top of the loaves or muffins before baking.
Posted by christine

that looks really yummy- i must try making that immediately! i have about 10 different versions of banana bread but i dont particularly swear by any one... although the one i like most makes use of WHITE choco chips and pecans :-) im going to buy bananas this am. BTW nens, i got a new doggie. Its a beautifulkly black poodle. Her name is... broccoli. ill mms you a pic

Yurm! I love banana bread :) I have one recipe that so far has been a fave...will try this one! Your banana bread looks super good...especially with that generous amount of topping!

yummmm! am eating it right now nens while your in the kitchen. must try and make for the house, everybody at home loves good banana bread.

btw did you use white or brown sugar? also what kind of flour?

Wow white choco chips and pecans! That must be so good. Awww I'm so glad you got a new puppy, she'll never replace lulubelle but she'll be loved just as much I'm sure. And ummm, why broccoli? haha Btw, I used white sugar for the loaf, brown sugar for the streusel nut topping, and regular all-purpose flour.

Gins, but you had OLD banana bread! I made that over 5 days ago. You must try it freshly baked. And please look for Lil's recipe so we can try it and compare. :)

thanks so much nena :-) im gonna try this in a couple of days to let the bananas rot :-) will let you know how they came out.

Wow...to me, that recipe looks like Greek. I'm sure it's simple, but I am a guy who has never learned how to cook (though I really do want to).

I love banana bread, by the way. Good stuff!

For the millionth time,,,,,DON'T visit Joey and Christines blogs at bedtime!Bad nuff others never listen to me now EYE am not listening to me.

Am not very fond of banana bread, but your post makes it sound and look so tempting to try. Especially with your suggested toppings.

Hi Corey, nothing could be simpler I promise! :) Go ahead and give it a try.

BD, 2 hours. That's all the time you need from when you last eat to when you go to bed. Just remember that. :)

Hi Socky, the topping is really good. I go overboard with it sometimes though hehe. I think I really should trim it down a bit since there's already so much sugar in the loaf. But I can't help it! When I really feel guilty, then I just scrape it off. :)

Looks so good ah! Will have to try making it this week.

You can bet that I've bookmarked this in my newsreader. I heart banana bread...it's like a taste of my island home!

Rowena, I hope you do try it and let me know how you like it. I know what you mean about it reminding you of home. Certain food really carry with it generous amounts of nostalgia. They are the best kinds of comfort food.

Am going to make this over the weekend. Will shop this afternoon so the bananas are good and mushy. Why margarine for the loaf though? I'll use butter since I'm partial to butter over margarine. But I thought I'd ask. :)

ok i tried this recipe and.... its a WINNER!! I did kinda overbake it a bit-- my bad. But they still came out moist and delicious, albeit a bit crusty on top, which rocio enjoyed :-) well, im rotting a few more bananas to try again next week. really good one, nens thanks!

I'm also partial to butter actually, and this is one of the very few recipes I have that calls for margarine. I simply didn't want to fix something that wasn't broken so I left the recipe as is since it was already so good. But please let me know how it comes out using butter k. I should actually give it a try sometime.

will let you know how the next batch turns out

thanks for dropping by CookingChat! As much as I like to cook, baking hasn't really been my thing. I just made bannana bread for the 1st time yesterday (some over-ripe bannanas were calling!) and it came out pretty well. Might have to try your recipe for it next time!

Hey cookingchat! I hope you do try it. I really think you'll like it. :) Let me know if you do, k?

I too, consider myself a banana bread snob. This recipe looks good, but not so different from all the others (other than your addition of streusel topping, which I like). One thing that concerns me is the use of margarine in the batter... I am a purist when it comes to baking and believe that nothing good comes from using margarine instead of butter. In case you're wondering.... the absolute best banana bread recipe, IMO, is the Whole Wheat Banana Bread recipe in the older Williams-Sonoma Muffins and Quick Breads book. I have made it literally millions of times and it always gets rave reviews. Don't let the whole wheat part of it scare you, nobody ever knows I use whole wheat flour; it is simply moist, flavorful, and delicious (and even slightly healthy!) Enjoy!

I used butter in the place of the margarine and I have to say, it made my house smell glorious. And the flavor's been pretty good since I made my first batch. Thanks again for the recipe Nena. Made 8 loaves for exofficemates and with a couple of mini streusel disasters (overloaded them and they bubbled over), they came out looking good.

Hi Rachelle! I agree butter is always better! I like the idea of using whole wheat flour actually so I'd like to try that recipe. I try to subsitute white with brown (rice and bread) as much as I can and it's something I've gotten used to and now actually prefer.

Mila, I'm glad you not only liked the finish product but enjoyed the actual process! :)

I tried the recipe with butter yesterday and it came out just as good, maybe even a teensy bit better. Yay! So I revised the recipe. After all, according to Anthony Bourdain: "Margarine? That's not food!" :)

looks like i've found the recipe...i have been searching for a banana recipe for ages and have always ended up disappointed. hopefully this is it. thanks.

This banana bread is SO GOOD.
The best I've found.
I've used wheat flour, and added a bit of honey and cinnamon too.

I like adding cinnamon too! But I've never tried adding honey to the batter, I'll try that, sounds like I'd love that. :) THanks!

Hi! Will be trying your recipe. This one has no milk?

Hi! Nope no milk. Do you normally add milk to yours?

the banana bread from Baguio Country Club is quite heavenly.

I haven't tried that one, GUS. But I'll make sure if I'm ever up there again to try it. Thanks for the tip! :)

Yum Yum! A favorite of mine, I've always wanted to bake something like that. I rather have my kid eat something like this, instead of junk candies, this one also a banana recipe, I find it good for kids.
http://therecipe-finder.com/banana-nut-cinnamon-swirl-bread/4264/

Ooohh with cinnamon swirl, I love it already, thanks for sharing that! :)

I, too, have been searching (forever, it seems) for a GOOD bananan bread recipe. I soooo want to surprise my loved ones with this. This one looks and sounds great. Will try it this weekend. (Keeping fingers crossed!)

I'm pretty sure you won't be disappointed, Liz! But do let me know how you all like it. :)

I would love to try this recipe. Since I'm from Europe I'm not used to your meassuring system. Does the T (as in 4 T butter) stand for tablespoon or teaspoon?

Looking forward to your reply :-)

That would be Tablespoon :)