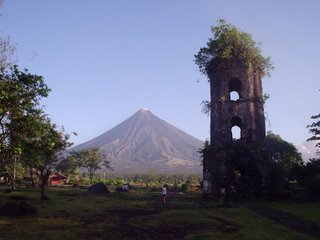 On our way back home from Donsol, we stopped by the Cagsawa Ruins in Legaspi, Albay. It is a little over an hour's drive from Donsol. We decided it would be nice to have breakfast here. Since we got to Cagsawa at 7 am, the cafe had just opened and all they had to offer us was coffee and pancit (asian noodle stir-fry). We thought it was a little odd to have this for breakfast, but we were happy we ordered it, it was yummy!

The Cagsawa Ruins Park offers visitors one of the most spectacular view of Mayon Volcano, the 'world's perfect cone'. It is an active volcano, and since the 17th century there have been about 47 eruptions recorded. It is actually on active mode right now, as evidenced by the little plume of smoke rising from it's summit. 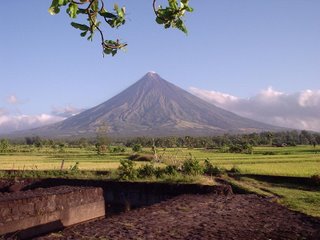 During the eruption of 1816, the townsfolk fled to the Cagsawa Church to seek refuge but alas the church was not spared the wrath of the fiery volcano and over 1000 people were buried alive inside. 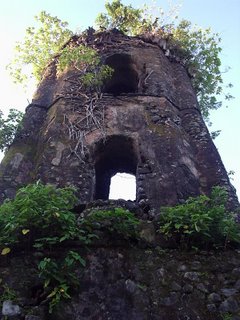 I had only previously seen Mayon in postcards and glossy travel magazines and in travelogues on TV. Nothing prepares you though for it's grandeur when you see it for real. We reluctantly left the park to continue on our long journey back home.

What a perfect way to end the trip. :)

loved all the stories in your blog. can't wait to read about your next trips...

I spent my 2nd and 3rd year in High School in a school that is very close to the Mayon Volcano in Locsin (daraga). It was called United Institute or UI. I don't know if this Highschool still exist today. I passed that Cagsawa ruins on my way to and from my hometown, Malobago. Yep! I only went home every weekend since Malobago was an hour and half ride by bus from Daraga.

Thank you again for your positive and encouraging blog about your trip and experience in Bicol--the place where I was born.

hi Zoe! You're most welcome. :) It was a pleasure to visit your province, and an honor to be able to share my experiences there.