Donsol : A dazzling display of lights 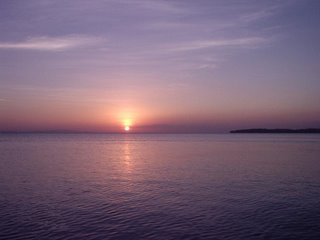 Our heads still reeling from the morning's experience, we spent the afternoon just lazing around the resort. Some took a nap, others went for a walk, most of us chose to hang out and chat until the late afternoon. We had yet another adventure planned for the day - a Firefly River Cruise which we were eagerly anticipating.

Donsol River is a very long stretch of mangroves, coconut trees and shrubs, making it a perfect haven for the fireflies which thrive on lush vegetation particularly near bodies of water and tropical climate. (Did you know they aren't actually flies, but beetles?).

I remember when I was little, seeing fireflies were not so uncommon especially in the provinces. One time at a beach house in Dumaguete, I saw a tree entirely blanketed with these bugs. It was one of the most beautiful things I had ever seen and I longed to see it again. 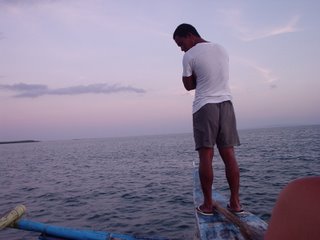 We hired 3 outriggers to take us there and just before the sun set, we made our way to the mouth of the river from the sea. The ride itself was already pretty special, the water was calm, the wind was flowing through our hair, the hum of the boat's engine lulled our senses and we had a most beautiful sunset backdrop. 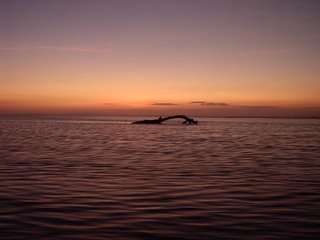 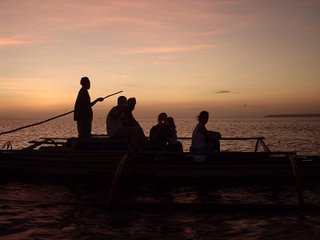 We putt-putted our way from the resort and into the mouth of the river and under a bridge. Here we were met with a scene reminiscent of the movie Anaconda, and I half-expected the giant snake to burst up from the unassuming waters and swallow us up. When I succeeded at pushing this thought off my mind, I took in the scenery.

By this time darkness had set in and the sound of crickets filled the air over the din of the banca's motor. The sky was completely covered in stars, I had never seen anything like it! I'm talking gazillions!! It was so beautiful. Van Gogh himself would have been inspired. We stared up at the sky almost forgetting what we came here for until our the voice of our bankero (boatman) brought us back to reality.

He directed our attention to a nearby tree along the river bank where a number of fireflies were dancing. I loved it! I think I could stare at them for hours. Did you know that in Japanese poetry, the firefly is a metaphor for silent yet passionate love? We lingered here for a while watching this romantic courtship of light before we continued on down the river.

If you drag your hand in the water, you create a bright silvery effect on the surface because of the presence of luminescent plankton. I like to think of it as liquid moon. :) I was so fascinated by this phenomenon that I removed my flip-flops and dragged my foot as we cruised along.

Every once in a while , we would spot a tree filled with fireflies and we would dock the banca there for a bit and just watch. Sometimes they would fly above our heads, dance at our sides and skim the water beside us. Our boatman caught one for us, and we passed it around gently before letting it go. It was like being in a planetarium, only this time there were stars above, around and below you! It was surreal. I felt this rush of emotion course through my body. I now have a newfound deeper respect for nature.

Just when we thought this whole night couldn't get any better, we saw the first of many local fisherfolk scouring the river for shrimp and crabs. You see, they aren't your everyday, run-of-the-mill fisherman. These ones have a kerosene torch (gasero) strapped onto the top of their heads, and they wade in waist-deep water. They use a sudsud , a V-shaped net to catch their harvest.

The glow of the torch casts eerie shadows on their faces , and their slow wading movement in the glassy water makes them seem almost supernatural. I wish my camera could have captured this sight! Seeing them in pairs and then in groups was just amazing. We even had the boatman kill the engine, just so we could watch them in silence.

Each element of this journey-the fireflies, the stars, the plankton, the fishermen-each one possessed its own magic, but all of it put together makes for one unbelievable, magical experience!

Wow, thanks for leading me to this post. I envy you, that must have been quite an experience! The fireflies, the "liquid moon," the boat ride.

To travel widely (but like you, not via packaged tours) is one of my goals. But I can't afford it right now. So I'll have to travel vicariously through your blog, until I can really do it myself. :-)

I'm glad you enjoyed it, as I knew you would. :) I have a love for fireflies too, and the memories they bring with them.

hi christine, wonderful narrative of your travel to bicol! i'm going there end of this month and would like to experience too all that you did. how do i arrange for the firefly river cruise? thanks!

Hi Lia! Thanks. :) I'm so excited for you! We arranged it via the same boatman who took us out to the whalesharks. We told him we wanted to do the firefly cruise that night so he arranged it for us. Otherwise, I'm sure you could do it via the resort you're staying in. It's such a small community Im sure anyone you talk to will know someone who can take you there. Have fun!!! :)

wow, you're sweet! thanks much!

Thanks for your account of your trip to Donsol. We thought of going there in in March but was not so sure. We plan to take the bus as I was not sure of the road conditions. After reading your posts, I am absolutely convinced that I absolutely have to go to Donsol!

By the way, thanks for your comment on my blog www.catswalks.com.

Hi Cathy! You're welcome. I hope you find your way there this March as that would be the last month for whalesharks there this year. I've heard some horror stories about the buses- though they're very clean and comfortable, they break down quite often. But of course it actually runs well majority of the time and we only hear the breakdown stories. If you manage to catch a Cebu Pac promo, you can fly to Legaspi and save yourself the hassle and save a lot of time which you can use to explore the Cagsawa ruins and see Mayon Volcano as well. :)

Thanks for a beautiful narrative of your sight seeing experience in Donsol. I was born in one of the barrios of Donsol and I think the Donsol River that you mentioned is the same river that we used to travel on, using a small banca when, I was a child. I've been to Dancalan where most of the hotels are situated now. I never imagined then that Donsol would one day be famous for it's Butandings and Firefly sightings! My mom told me tales about these gentle giants appearing on unexpected moments by the side of a passengers boat. That was a long time ago. I'd like to see Donsol again. I'd left the area when I was about 10 years old. Sorry for my long comments but I appreciate that you let me reminisce through your post.

Are the roads from Legazpi to donsol in good condition with concrete or asphalt pavings instead of rocks?

Hi Zoe! It was so nice to read your comment and to know my post let you reminisce your childhood in Donsol. :) I don't remember exactly how the road were, but I don't recall it being rough. I think it was already paved by the time I went.

Hi Christine, thanks for answering my questions.